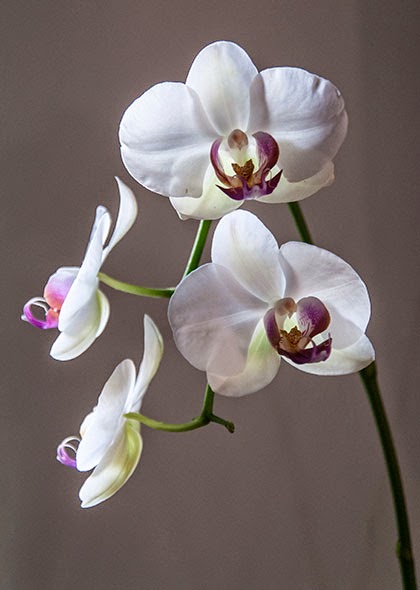 I am developing a special fondness for orchids. I have them in my home, and they are a joy. The blooms grow from stout, leafless twigs, and are spectacular for their form, color and delicacy.

They are often sold in grocery stores, and in garden shops. After blooming, when dormant, they can seem dead, and some people throw them away. I had a few like that and my wife thought they were no good and should be tossed out. But I kept them by my kitchen sink, near a window that only received a bit of morning light, and since I cannot stand dying plants, watered them regularly, until lo-and-behold, months later, blooms re-emerged from shoots arising from leaves. My wife thought I had performed a miracle and re-resuscitated the dead.

A woman, who with her husband owns a collection of my paintings, recently contacted me to do a commission for her. She wants to surprise her partner with a birthday gift—an oil painting to go in his huge dressing room. We tossed around ideas, and came to the conclusion of a big, horizontal painting of orchids. The piece will be 2 feet high by four and a half feet wide.

I went around to local plant stores and photographed specimens, took pictures of my own plants, downloaded photos from the web, and then photoshopped them together. The result is the prototype for the painting I will make.

When my art collector saw the mockup I sent her, she wrote back, “Literally! I gasped! How beautiful!!!!!!”