A young man with something wrong and a big spirit, he filled the corner of the restaurant with an ebullient gayety and light. He seemed too open and forthright, unaware of his disability. I was working as a waiter while trying to get my art career going and for a moment, we looked at each other, and he positively gleamed. Later, another waiter remarked privately that he noticed something unusual in the young man—almost pitiful. On closer observation, the fellow could not use his right hand, and lacked full brain function . . . as if damaged very early on in life.

Later, to my surprise, I learned that this person, Patrick, was the brother of the young woman I was marrying, Kathleen. The marriage lasted five years and produced my daughter Naomi, who died at age nineteen and whom I wrote a book about; A Heart Traced in Sand, Reflections on a Daughter's Struggle for Life. And now, just over a week ago, Patrick died at age 69.
A couple weeks ago, when I learned Patrick was in the hospital in critical condition, I was surprised, and then after he died two days later without many friends or family, I offered Kathleen to write the obituary. It appeared in the newspaper, and a small but interesting group of people showed up at the graveside memorial when Patrick's body, in a simple wood casket was lowered to its final resting place . . . only a few yards from Naomi's grave.

Among the comments heard from mourners, a simple thread of testimony developed; how Patrick's unassuming sincerity, humility, and lively good humor meant a great deal to those he touched. A former Santa Fe City mayor was present, and remembered how Patrick would often arrive unannounced at city hall and walk straight in to the office with a big smile to say hello. This was when he had a job standing on a nearby street corner selling newspapers. The local paper he sold ran his obituary for free. Another man at the ceremony, a fellow paper vendor, was hit by a car, and when Patrick, who never drove a car, showed up at his bedside, he asked with surprise how he had arrived at such a distance in the dark. “I walked!”

Another man tearfully remarked that Patrick was the truest human being he had ever met, and had a special inner light. And to this, I added, “Unlike most people who's light flickers on and off depending on if they are happy or sad, frustrated or angry, Patrick's light was always on.”
Patrick lived alone all his adult life, and when his cousin, a lawyer in nearby Albuquerque who arranged the funeral, was cleaning out his apartment, she said that among the memorabilia, were volumes of notes, written on scraps of paper—sometimes paper napkins—detailing the days events when he had been out walking and in stores, including the hour. Especially, Patrick wrote about people he met, friends and strangers, and noted them and how they touched his life.

Now Patrick, I am writing for you, to say, you touched my life too. 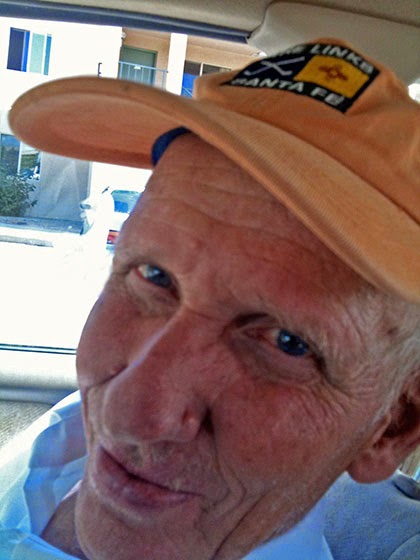 This is the obituary I wrote:


Patrick White, age 69, passed away at St. Vincent Hospital, Wednesday, October 29. He was born in Panama, August 18, 1945, and came to the United States with his mother and sister in 1968—first to Florida, and then to Santa Fe in 1972. He was born with disabilities and did not finish high school, completing the eleventh grade. During the past two years, he took courses to get his GED but couldn't pass algebra.
Patrick worked as a janitor at De Vargas Mall and Paper Tiger, before working as a New Mexican newspaper street vendor.
Mr. White was a true lamb of God, without negativity, anger, or ill will. He was cordial, genuine and friendly with everyone, and had a child-like innocence that uplifted the people he met. He did not drive a car, so could often be seen walking in Santa Fe. He never had material riches but in spirit he was always full—never complaining and cheerful until the end.
He is survived by his sister Kathleen White of Santa Fe.
Graveside services will be held on Monday, Nov. 3 at 10 a.m. at the Santa Fe Memorial Gardens at 417 Rodeo Rd.