Everything Is Part Of Everything 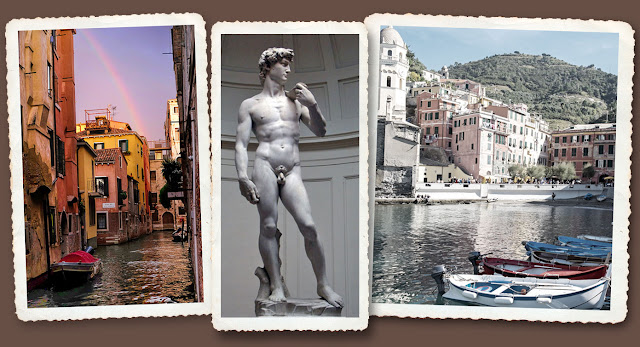 Life cannot be held, only experienced. To try and hold it is when we realize it is but a dream. When we believe we are in possession of something, in fact, this is illusion too, for nothing can truly be possessed, everything is part of everything else and is continually transforming and subject to external forces beyond personality.

When I lost my eldest daughter at age nineteen, after watching her suffer for two years while receiving the most skilled treatments and care, is when I truly became detached from holding on to anything of this world. Nobody can hold on to their most precious possession—their mortal frame, and I saw how much she loved hers and tried to keep it.

Certainly since her passing, from her vantage point of pure spirit in divine love within illimitable space, she has guided me to experience the world fully without fear, knowing it is a dream unfolding.

The traveling I am doing is full of dream sequences, beginning this year in September, living in Venice, Italy. My apartment was above a little stone bridge that spanned a canal that gondolas passed beneath each day. Nearby was a campo over a thousand years old. I like to paint, take photographs and write each day. After six weeks in Venice, THE DREAM took me to Cinqueterra on the Mediterranean coast, with its five magical villages hugging the steep, rocky shore, almost falling into the sea. From there, Florence, the birthplace of the Renaissance and high art, where my apartment sat steps away from Michelangelo’s marble sculpture masterpiece, David. Each day, the DREAM wind blew me through the fabled streets, until one day it took me to Rome—the eternal city where it is said all roads lead. I have been there many times before and it reawakened an awe of human ingenuity and achievement, with its vast architectural wonders from the time of empire. I heard through the ages the echo of horses hooves as they pulled gladiator carts, and listened to stringed instruments play in markets bustling with commerce just outside marbled churches filled with masterpieces of art. In Rome I relished a stunning art exhibition by a contemporary artist who filled me with inspiration to carry into my own work.

From Rome, into the sky again to land six hours later in New Delhi, India and then to arrive in Varanasi, one of the oldest living cities on earth. Cows roam the streets amid the crush of people, with bodies arriving every day from all parts of the globe to be burned on cremation pyres that are always blazing. The ashes thrown into the sacred Ganges River mean that salvation is assured for the believers. I floated on the Ganges in a boat to watch candles lit and placed in baskets to drift on the water, and experienced the thunder of explosions marking the Diwali Festival. THE DREAM introduced bacteria into my body and intestinal illness, as it happened before when I visited India. I continued painting, but spent more time with photography, taking some powerful images, especially with an American friend who modeled in flowing cloth on temple steps overlooking the Ganges. 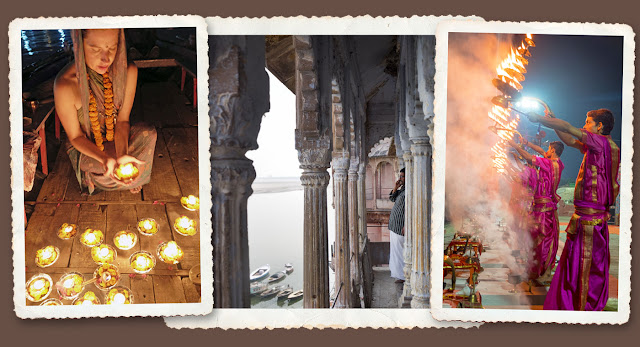 Almost in a daze of altered perception, a train ride of twenty hours brought me to the heart of the continent, to Pushkar, the home of the only Brahma temple in India, where I arrived at the beginning of a famous once yearly festival. Thousands of camels were brought there to be traded and sold, with gorgeous horses, tents, festivities and excitement. THE DREAM introduced a young boy to my side one morning to take me to his family who live in tents on a hilltop. The man is a maker of folk instruments, and he and his wife sang and made music for me. We become friends, and THE DREAM brought money to them through one my friends on Facebook who took compassion on their difficult life of extreme poverty.
I am in other worlds, and far from the events of America and other places where news of violence and political intrigue comes to me in bits and pieces. 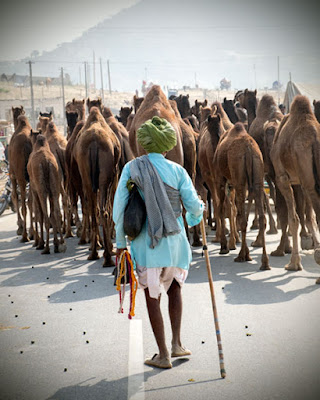 Now I am in northern Thailand, and do not see camels but plenty of monks in flowing saffron robes amid ornate Buddhist temples with soaring spires above intricate gabled roofs and dragons guarding the doors. My stomach ailments have mostly gone away, and each day is exploration, photography, and either painting or writing. THE DREAM has brought me together after seven years with Thai friends from the past. Our lives are woven in DREAM. 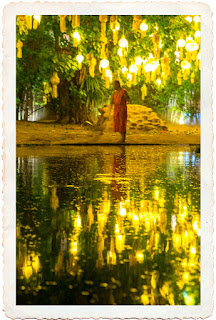 As THE DREAM continues unfolding, I wonder where it goes and where it leads. Soon it will lead to Cambodia but after that, I do not have a clear picture of what lays ahead. Perhaps the misty mountaintop needs time for the the wind to blow away the shrouding haze—and reveal itself entirely in glory.
Posted by Steve at Sunday, December 06, 2015
Email ThisBlogThis!Share to TwitterShare to FacebookShare to Pinterest
Labels: awe, camel, death, Dreaming, India, ingenuity, Italy, Life, Philosophy, photography, temple, Thailand, Travel, unfolding


Steven this is simply beautiful!Thank you so much for your wonderful testimony.It has made my life richer ...God bless