A Smile In Return For A Smile 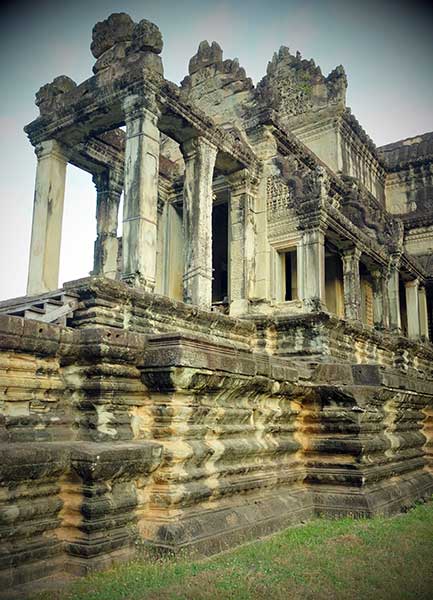 The poor jungle nations of Asia never appealed to me. Cambodia fell further in my opinion after learning of the atrocities of the Khmer Rouge regime during the civil war, 1991-1997, when millions were ruthlessly massacred. So I arrived in Cambodia after a sojourn in Thailand with trepidation, and have been pleasantly surprised. The people are gracious, more fluent in English, and smiling too. Cambodia is the country cousin to Thailand, without an ultra modern city like Bangkok. 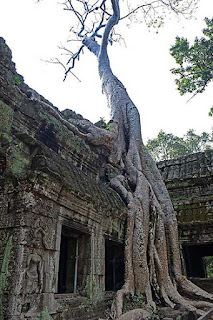 My journey to Siem Reap from Bangkok went smooth enough, and when I arrived at my hotel after 10 in the evening, I found my room spacious and comfortable. The next morning complimentary breakfast satisfied my taste, especially with a cook in the room making custom omelets to order, and after walking around the neighborhood visiting a nearby grand temple and old town with bustling market full of foods, fabrics, and arts & crafts, my previous attitude melted away.

If there were any doubts of the value of being in Cambodia, they have been completely erased by Angkor Wat and the cheerful beauty of Cambodians. I had seen photos of the largest temple complex in the world and was not impressed by the drab colors and jungle scenery. I did not know that it is the most visited sacred site in the world, and if I did, that would have discouraged me further. 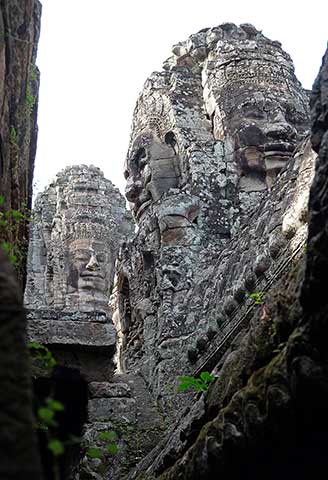 I set out this morning before dawn with Francesca, an Italian I met on the flight from Bangkok and became friends with, and Dara, our trusted and smiling tuktuk driver. Even before we got on the road to the temple, tuktuks with passengers were everywhere going in the same direction through the darkness. Fifteen minutes and we were pulling up to Angkor Wat and joining a throng of people walking toward the featureless dark temple. A crowd was already massed at a lake, unable to go further until opening time. As the sun rose the sky brightened behind the spiraling domes and slowly the temple features became visible in bluish tinges with a rosy sky above, embellished by fluffy clouds of purple. We were a bit in awe and simultaneously disappointed to be at the back of a crowd, unable to get the pictures we wanted. Surprisingly, a charming little girl arrived by our side in the half-light and took an order for coffee, then dutifully arrived back in minutes with tasty hot drinks. When we continued forward my impressions steadily rose at the base of the complex while I looked up at the massive scale of the carved rock and orderly beauty of the temple. As we strolled, it became apparent we were in no ordinary place. The crowds quickly thinned so we were actually quite alone. The place is so huge, people set out in all directions by foot and tuktuk. Our wandering excursion took seven hours and there is far more to see, but we were overwhelmed, hot, and growing tired. I bought a ticket that allows for two more visits. 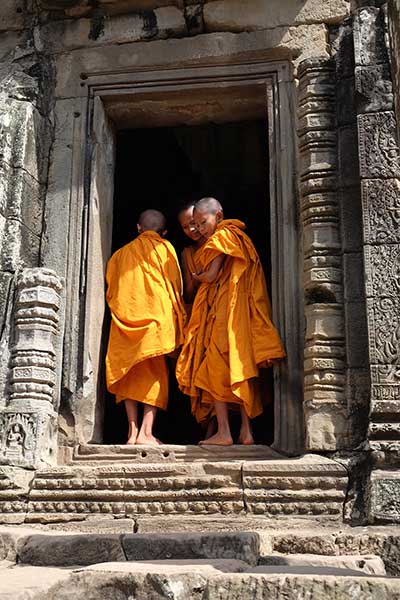 At various times Dara would find us and drive us from temple to temple. Always, the beauty was great along with the dimensions, especially in grandness of design and the ubiquitous stone carvings adorning every facade and corner. Angkor Wat is more interesting for the fact that it began Hindu and later shifted to Buddhist, so the two influences are mingled. The jungle through the ages has entwined with structures, so that huge trees are often seen growing out of temples and snake-like roots wrap around carved block. Many stone faces appear, sphinx like and huge in improbable places high above, adorning towers. Often, monks in orange saffron robes are seen making an accent amid the monotone structures, and I loved taking their picture. Always a smile in return for a smile. And that is the way it has been in Cambodia so far. 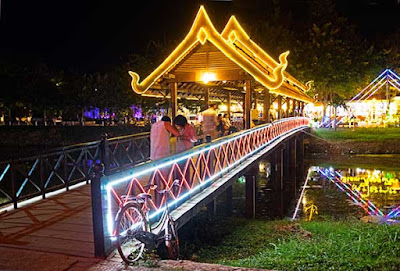 Wonderful I found your site here...Beautiful.