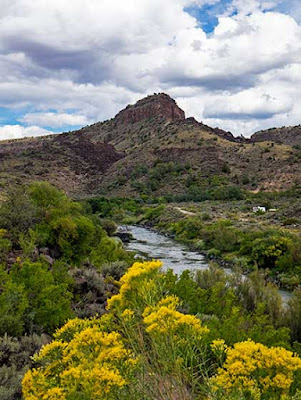 Since arriving back in the United States in February, brought home by the unexpected death of my mother, I have been unusually subdued and reclusive. Now, the late summer vibrations are strong here in the high plains of New Mexico—and I have been drawn out of a cocoon to be like a butterfly, free to flutter in the broad expanses.

Last year I opened a pop-up gallery on the historic Santa Fe Plaza for two months. It was a success. So this August I opened and will stay three months. I have been working the gallery alone. Now the magic outdoors is calling me to go out and paint in "plein air." I've hired a dear friend to assist several days a week. After living here for forty years, I know where to go outside of the city to find just what I want.

I drive north in my van through a couple small towns. I either go to the Rio Grande Gorge, or to the area known as Ghost Ranch, near Abiquiu, where the famous artist Georgia O'Keefe spent her last years. Both have spectacular scenery and and are not crowded.

The first day I went to the Gorge and made a painting from slightly above the Rio Grande River, looking toward a tall mesa with the river in the foreground. Chamisa shrubs are just now coming to bloom and added a splash of brilliant yellow in front. When I finished I found a nice spot higher up that looked over the canyon walls to the river below. I got my cooking supplies and food out to prepare dinner, but then could not find a frying pan. I forgot it! So I drove home. 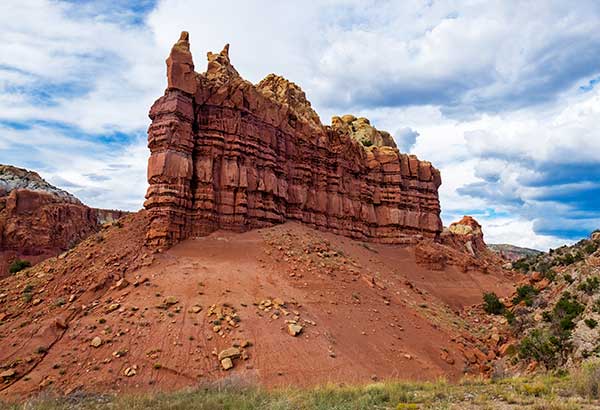 The next day I went to Ghost Ranch. Along the way the scenery was so spectacular that I had to stop several times to take pictures. The clouds especially added immense drama as they billowed and danced in the deep blue sky. Past Ghost Ranch with its red rock formations I found a dirt road that goes toward Christ In The Desert Monastery. I pulled off near some pastel bluffs and set up to paint. Then the beautiful clouds began letting loose raindrops! No worry, I knew it would pass, so I gathered my gear and laid down in the van, listening to raindrops splash against the roof. A half hour later and I was up and out, resuming painting with the fresh aroma of sage filling my nostrils.

A few hours later, as I strove to finish my painting amid the changing light, I thought, “Wow! How much easier it is to just take a photograph!”
Posted by Steve at Sunday, September 18, 2016
Email ThisBlogThis!Share to TwitterShare to FacebookShare to Pinterest
Labels: Abiquiu, Boone Gallery, Christ In The Desert Monastery, Ghost Ranch, Gorge, high plains, Northern New Mexico, plein aire, Rio Grande, sage