Something Enchanting About A Road 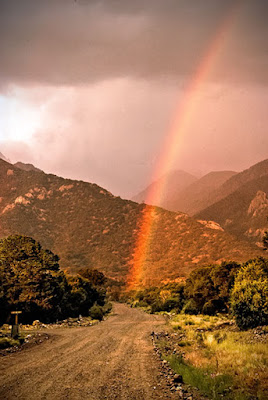 Two roads diverged in a wood and I - I took the one less traveled by, and that has made all the difference. -Robert Frost

There is something enchanting about a road that starts under my feet and leads out toward a horizon and disappears. My earliest memories of drawings are doodles I made in school when I put pencil to paper and drew a horizontal line in the middle and then two lines begun on either side of the page that ran side by side together vertically—getting closer until they disappeared at the horizontal horizon. How magical that something under foot can continue forward and disappear even as you stand upon it. It beckons curiosity. And sometimes, as on a long journey, it continues extending in front, offering surprising panoramas along the way.

Any environment that stops me, including tangled jungles, cities with dead-end streets, subdivisions that curl in on themselves, labyrinths, jail cells, will make me uncomfortable. I notice I get uneasy at the ocean after awhile. There is no road into it! It is impassable and stops me in my tracks. Perhaps the great ocean explorer Jacques Cousteau, (French: 11 June 1910 – 25 June 1997) would take exception and say, ah, but there is a way in, but no road! 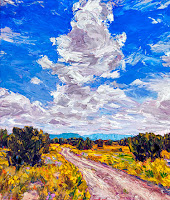 I am not easily confined. Maybe I've inherited tendencies from my ancestor, the famous American explorer and outdoorsman Daniel Boone, (November 2, 1734 – September 26, 1820). If you see the only known portrait of him, we look alike! 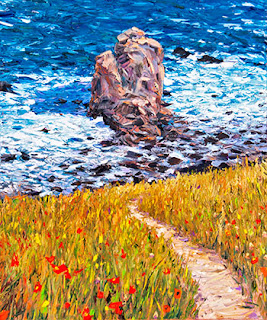 In my work I also break confines. Frequently I will make something entirely new and out of character. When people come in my gallery, a common remark is surprise how one person has made such a variety of art.

I have started upon the imaginary road I drew as a child and kept going—traveling completely around the globe twice now.  Moving in one direction, I arrive back to where I started, and that is magic. 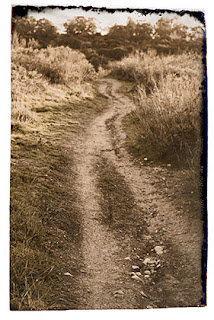 Roads and paths continue to show up in my art and photography. In some ways, my writing too.
Posted by Steve at Sunday, September 25, 2016
Email ThisBlogThis!Share to TwitterShare to FacebookShare to Pinterest
Labels: horizon, Journey, Ocean, path, rainbow, roads, world