Deep within the vault of my memories, full now with six decades of life, is an episode of rapturous wonder, thrill, and happy connectedness. Veiled and buried with so many other memories, once in a while it comes to mind, as it did the other day.

Late summer is now shifting into the autumn season, and the colors have been summoning me to paint outdoors. Temperatures begin cool and become balmy. One day I drove about an hour out of the city to one of my favorite places; the Rio Grande Gorge. Following the twisty, softly flowing river through volcanic rock canyons, I found a scenic area by a bend. I climbed out to scout for a scene to paint, and took my camera. Amidst tall reeds at the river edge, the only sounds were the gurgling of water and paddling of ducks congregated on a log by the other side. Among the green shrubs and brilliant yellow blooms, I spotted some crimson leaves—a sure sign of the autumn. It was the red foliage that jarred loose the buried memory, so pleasant and nostalgic. 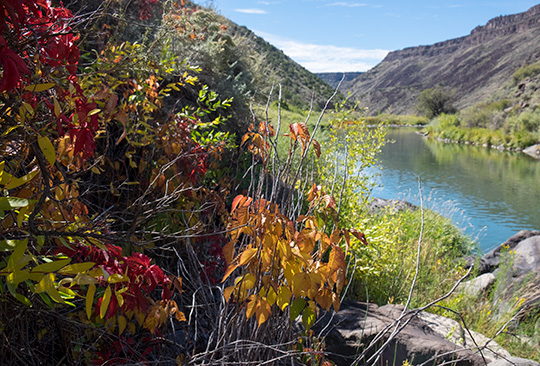 When I was but six or seven years old, beginning school in La Grange, Illinois, (a suburb of Chicago) the class went on a field trip at the beginning of Autumn. We drove out into the country to a nature preserve. The weather was perfect—blue skies and the lingering warmth of summer coming from the earth. Colors of nature were already changing. Several teachers watched over the group of children from various classes. A sense of happiness and love pervaded the day. Something thrilled me and touched my soul with wonder—to be out of the confines of a classroom, yet with adults who took pleasure along side of me and the other children. The sky seemed so blue, like I had never seen before, perhaps because the colors of the trees and fields were burnished so brilliantly orange, red and yellow. To walk in the grass almost up to my waist and hear it swish, while smelling the aromas of plants and fertile, moist earth . . .
I came upon an oak leaf that had fallen onto the path at my feet. It's red color surprised me and I became aware how color could arouse my senses. I still remember that leaf.

Later the class went among tall reeds and cattails by a pond. It was there that I saw a snake slither by, gliding in the water, wriggling rapidly while holding its head up. I thrilled at the sight and also the slight danger of something foreign, mysterious, and alive arriving out of the deep dark water.
The visit was over after a few hours and we went back to school. I do not remember the school as clearly as the sights and sounds of that day in nature.

At the Rio Grande, as I relished the nostalgia of that memory, I stopped to gaze at the red leaves, while listening to the river flow and feeling the sun warm on my skin. Hiking back to unpack gear and make a painting, I trampled among sage bushes. They released an indelible pungent aroma that had a medicinal effect on my senses and mind.

The painting flowed through me the same way as the memory.