It all started with a bizarre thought that came to my mind many years ago in 1993. A couple of faces hanging from a clothesline like laundry hung to dry. I had no idea where the mental picture came from or why it arrived in the moment. I was driving on a lonely road on the way home from working at my art gallery. Another odd thought arrived on its heels; that I must paint it.

The painting I made promptly exhibited and sold. It was all so curious that more were created. Most arrived in the span of a few years. During twenty years over thirty paintings came. Many sold, but they were on the verge of madness and often took quite long to be bought—if at all. I remember having a show at my gallery, called Hangups. The entire front room was filled with them.

A young woman worked for me and had an uneven temperament. She could drink heavily at times but was quite brilliant. The show lasted for two weeks and she worked at a desk in the same room. The day the paintings came down and were replaced with landscapes, she almost cried tears of relief. I was surprised, and to this day remember her reaction. They are not easy paintings . . .

I had to quit at one point because I was becoming mentally unbalanced. I discontinued showing them but made a collection.

The last time I made one was over six years ago. This year, with the election heating up here in America, and the two candidates, Donald Trump and Hillary Clinton seeming to be ubiquitous and constantly in the news, I ventured to make another Hangup painting with the two of them. Now that it is done, as people see it they laugh. It breaks the serious fighting that has been part of the issue of these presidential elections . . and casts the whole matter in a humorous if not morbid light.

I am sure some people will not find the new painting funny. That has been true all along. The paintings cause reactions—either you laugh or get mad. 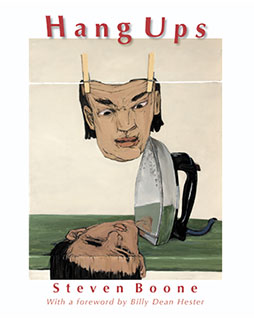 Click on the image above to see the book!