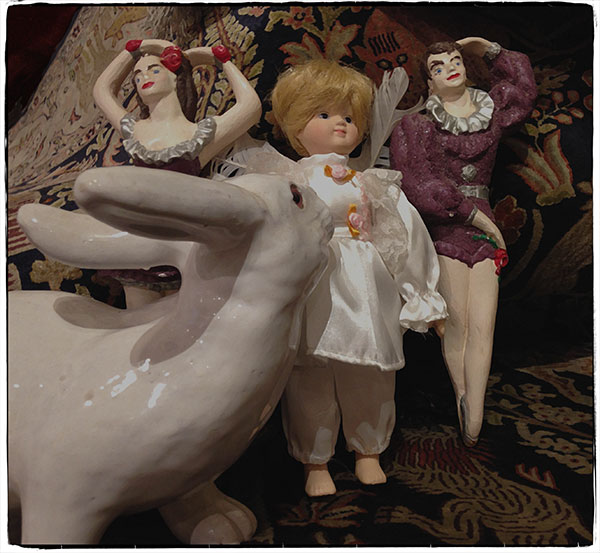 At 86 years old, Polly's energy arrived in short bursts and then would fly away like a bird that longed to break free from an old cage. It would come back but fly away again. Her habit was to take lunch at noon, then promptly go nap. In sleep or in visions as she lay on her bed in the afternoons, vivid wonders came regularly—vanquishing the thinnest of veils between worlds.

She had lost her dear husband years ago, and resided alone. Her son lived a thousand miles away. A few close friends visited regularly, bringing her books to read, and sometimes playing a game of cards. Recently in her dreams at night, and regularly in reverie as she rested in the afternoons, a lively and animated little vision would occur. The same four characters would arrive: a white rabbit, an angelic girl dressed in white, and two ballet dancers—male and female. Usually the rabbit appeared first, then the child angel with the dancers.

When Polly was six years old her parents brought a white rabbit home for their daughter, and her father made a cage where it lived in the backyard. It ate greens and carrots and was content, especially when allowed out to hop around the yard. Polly loved to stroke its long ears and feel its twitching nose on her tender fingers. It was so long ago! Whatever happened to it? She could not remember.

Her mother was an ardent lover of ballet and often booked seats whenever a ballet group came to town. Polly had many fantastic youthful memories of blissful nights seated next to her mother and father, watching famous dance companies. She had seen some of the greats perform; including Rudolf Nureyev and Nadia Nerina. Now, the pas de deux ballet memories came through the mist like whirling dervishes arriving from afar to entrance her mind and lift her heart.

A tragedy had occurred in her home when Polly was just thirteen. Her best friend visited after school. The two were playing jacks on the hardwood living room floor. Polly got up to get a glass of water and when she came back her friend was choking. Mother was summoned as the girl was turning blue in the face and not able to breathe. Frantically, mouth to mouth resuscitation was attempted but the child expired. Minutes later, the girls father rushed through the front door and gave out a wail of grief seeing his lifeless daughter in Polly's mother's arms. An autopsy revealed that the poor girl had one of the jacks lodged in her windpipe. For many years afterward at random moments of work or play, Polly sometimes fleetingly glimpsed her friend—as if she was not gone at all, but just transparent.

The foliage on the trees outside the living room window were changing colors. The days became shorter and the air chilled. Polly felt a tinge of remorse anticipating the cold coming. One day, she sat in her rocking chair, gazing for hours at the leaves falling, before suddenly getting up.  She went to the refrigerator and pulled out a pot of soup and heated it for lunch. She ate slowly, put the dishes in the sink and feeling tired, went to her bedroom. Outside, the sky was overcast, with bits of sunlight puncturing the clouds. Kicking off her slippers, she laid down in bed and felt her energy gather like a bird and fly out the window. She followed it. It flew and careened past the trees to a field not far away that was bordered by woods. Suddenly on her feet at the edge of a meadow, something white caught her eye. Rabbit stood at attention, one eye cocked toward her, watching, ears standing straight up. With a little hop, he was in the woods. Suddenly, by Polly's side the girl angel appeared and took her hand, pulling her to follow the rabbit. A path became apparent. Rabbit ran ahead. Polly heard footsteps and holding to the angels hand, she looked back to see two dancers, man and woman, in ballet costume coming up fast behind them. Rabbit hopped to the right. Everyone followed and entered a tunnel of earth and vines. It became dark but smelled wonderful. Polly squeezed tight the child-angels's hand who squeezed back and in a second, the darkness gave way to light as they entered a plush theater. Light dazzled from spectacular chandeliers hanging above. Rabbit disappeared.

The dancers bounded past. An orchestra was tuning and a ballet company waited onstage for the arrival of the two celebrated dancers. Finely dressed people were arriving. The child-angel leaned softly and whispered in Polly's ear, “Look down there darling!” She gestured toward the front row. A lovely couple seated in the middle turned, and beaming with smiles beckoned to Polly. Her parents had an empty seat next to them and waved excitedly for Polly to come join them. Suddenly, Polly's energy came back to her, as if she was not 86 years old but 16. Joyfully she rushed down the aisle to join them.

Nora, 80, Polly's neighbor, knocked but got no answer. The morning paper was at the doorstep and it was almost noon. She took the extra key Polly had given her and unlocked the door. “Polly, are you all right?” The home was silent. Nora went to the bedroom and opened the door. Polly's hands were folded on her chest and she lay with closed eyes, not breathing. Nora walked to her side and looked close. Polly seemed to be smiling but she was certainly dead. Nora peered tenderly at her friend. "OH! You rascal!” was all she could say.