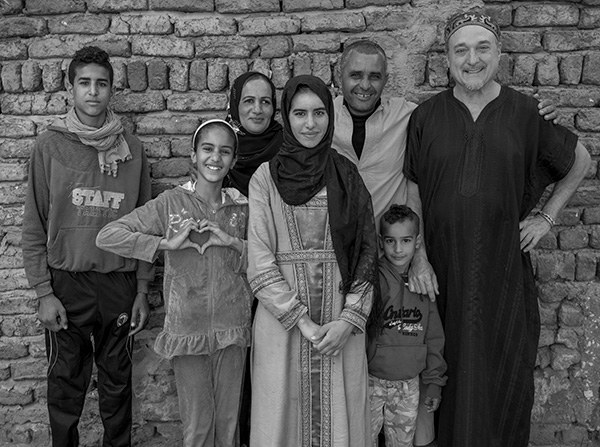 “Inshallah.” This is what Amira said the last time I spoke with her and asked if she wanted to go to college. Her father, my friend Hagag, had handed her the telephone. I sensed that she deeply would like to go on with higher education, but is also aware of her family’s needs. They share a difficult life in Luxor, Egypt with deep bonds of love.

Inshallah means “God willing” or “if God wills it.” It is an Arabic language expression. When I am in Egypt I hear it used frequently, and also, alhamd lilah which means “thanks be to God.”

I have raised money for Amira to go to college. Perhaps it was simple minded of me to offer to help in this way without consulting in depth with Hagag. The family has so many pressing needs. The oldest son had to go into the army after graduation since no money existed for college. He is out now, after serving two years. There are four other children. Amira, the oldest daughter, is about to take college qualifying exams.

Hagag has a spinal disk problem and needs surgery. He is almost disabled and has trouble doing work on his tiny plot of land along the Nile River. Edleah, the mother, has eye problems. Add to this that the refrigerator is broken and they have no money to fix it or buy a new one. The entire family lives on about two dollars a day—yet if you were to arrive at their home they would welcome you to sit and serve you tea with the utmost kindness.
The last several times I have spoken with Hagag about money and college for Amira, he has sounded unhappy. “Edleah needs eye surgery. The doctor said it is very important.”

I have a new friend, Hazem, who is Egyptian and speaks fluent English. He has a daughter attending college in the USA. We have not met personally, but were introduced through someone I know in Santa Fe. I needed someone who speaks Arabic to talk more in depth with Hagag. Hazem has now personally met Hagag and the family. He reports that Hagag insists that the most pressing emergency is saving the mother’s eyesight.

I have prayed about what to do. The surgery is a little more expensive than the year of college. But I also learned that college is not as expensive as thought. Public institutions are quite cheap. It is the room and board that adds up—but that can be alleviated by sharing.