The image, called The Traveler, is blurry. The mysterious human subject is a man but has been mistaken as woman. Strange light and shadow are all around, with golden luminescence falling from above onto the lone figure who is otherwise dark. The scene is absent of color and the landscape is so amorphous as to be almost anywhere . . . including another world. 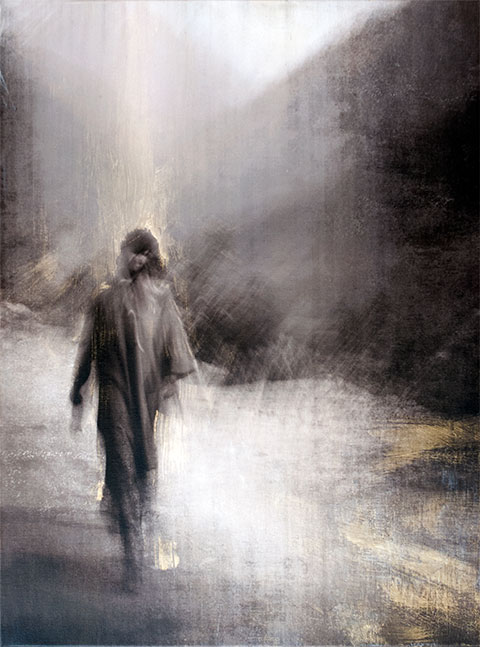 The image is popular in my gallery. 0riginally a photograph, I manipulated it somewhat in photoshop. I print it on canvas, stretch it on stretcher bars like a painting, and work on it with other materials so that in the end it is called mixed-media on canvas.

To take a photograph is often called, “the capture.” Usually but a split second. I like the term because it describes indelibly recording a moment in time and preserving it for viewing later in the form of a picture. Most photographers are trained in camera fundamentals and techniques, then use fine equipment to set up shots that are esteemed for detail, contrast, proportions of light and dark, as well as subject matter that is universally acknowledged.

Not so this photo. In October 2008 I was living in Kashmir, India on a houseboat on Lake Dal, at the foot of the Himalaya Mountains. One day I set out with the owner of the boat to ride horses in the mountains and trek. The day was marvelous and included a stop in a village where I painted and met locals. On the the way back, as the sun was going down we drove on a primitive road that twisted down along a river. Occasionally we went by homes and people. I was rather delirious with joy, feeling the air streaming against my face, full of happiness for the encounters of the day and all the beauty I experienced. I had experimented with using my camera for shooting pictures that included my movement and the turning of the earth . . . in other words, taking photos that did not try and stop movement but rather used it in the composition. We passed a man in the road. He wore a phiran—a native costume that is like a cloak that goes to the ankles. I leaned out the window, turned back to look and took his picture. A “capture” that took half a second. The moment proved serendipitous for the image has been enjoyed by many.

When one sells, I make another and add different strokes and textures so that each piece is unique and the art keeps refreshing. Prints on paper also are available.

For more on this photo, see: Footprints

For more on Kashmir, type it in the search field at the top of the toolbar to the right.
Posted by Steve at Sunday, January 27, 2019
Email ThisBlogThis!Share to TwitterShare to FacebookShare to Pinterest
Labels: costumes of Kashmir, experimental, Himalaya, joy, Kashmir, mixed-media, phiran, photography, Steven Boone Artwork