Recently Amy finished a round painting that included an extra-terrestrial riding a unicorn, surrounded by “lucky” symbols. Near the bottom are two trolls, also known to be good luck charms, (see: Troll Doll). 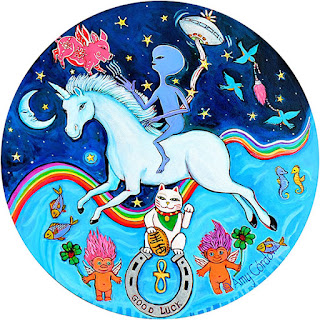 Trolls remind me of an episode from my youth that has always stayed with me. In the early 1960’s our family of seven were becoming upwardly mobile and lived in a lovely neighborhood in Washington DC. I was almost a teenager. Not quite. My father, Richard W. Boone,  worked in the field of social reform and was quite active leading an organization called Citizens Crusade Against Poverty. Mother had begun working as an independent insurance broker. It was decided to hire a live-in domestic helper. Mother nixed any applicants that were young and pretty. The choice was Mrs. Smith; a homely middle aged black woman who came to live with us and took a bus home to a black neighborhood on weekends. Mrs. Smith was treated with deference and became part of our family. She ate at the table and if any child talked back to her they would hear it from father. Her duties were cooking, keeping the home clean and tending to piles of laundry—everything my mother would be doing if she had not begun working as an insurance agent.

In the early 1960’s troll dolls became one of America’s biggest toy fads. Boys as well as girls collected them. I had several. I liked the broad round face, the hair that stood straight up, the glass eyes with the half-wild stare and the gooey feeling body that would bend and spring back. When I started keeping them in a private place in my clothes drawer, the trouble began. 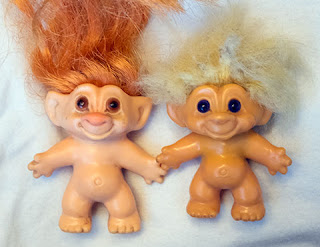 One afternoon I was in my room and Mrs. Smith came in. She made me open my drawer, revealing my trolls. Two dolls were resting gently on their backs looking up at us. They smiled mischievously with their big eyes, resting contentedly upon a pile of clean, folded white t-shirts.

“What are these?” she demanded. I could not explain exactly what they were . . . “Well, take them out of the drawer. I don’t want to see them again! And I am serious!” I was flabbergasted but removed and hid them somewhere else.

A week or so later, after the storm had passed, my little trolls went back to their home in my drawer. Mrs. Smith took clean undershirts and pants to my room, opened my dresser and got a shock. This time she was almost furious with me. “I told you not to put those in your drawer!” I knew this time she meant it and my dolls absolutely gave her the creeps. Secretly, I was happy my trolls had such huge hidden voodoo powers—after all, I had thought them to be harmless pet toys.