“I want to be inside your darkest everything.” -Frida Kahlo

The idea for making a painting of Frida Kahlo (Mexican, 6 July 1907 – 13 July 1954) came to me after I watched the movie of her life; simply called Frida. Mexican-American actress Salma Hayek played Frida and the movie is brisk, engaging and colorful. I watched it at home with my wife Amy Córdova.

Amy and I recently visited Mexico City and went to places that Frida and her husband, Diego Rivera left an indelible mark upon. Rivera has immense murals in various places in the city. Kahlo’s family home is now a museum.

One of the highlights for us was visiting Museo De Arte Moderno, and seeing a seminal work by Kahlo, called The Two Fridas. It is a big painting—almost six feet square. To stand in front of it is almost breathtaking. Kahlo’s fame grew rapidly after the 1960’s and now this artwork is iconic. 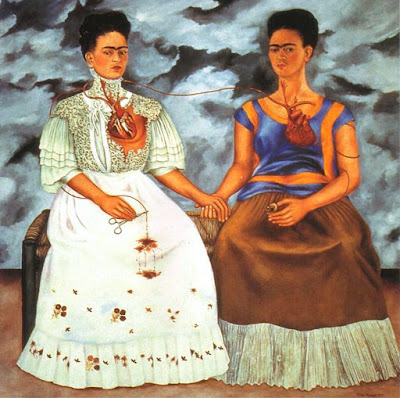 I researched Frida’s work and chose a painting she made early in her life, just before her terrible accident that left her crippled and in pain. It is called Self Portrait in a Velvet Dress. She made it in 1926 when nineteen years old. I copied it exactly and then put in the skeleton, as if embracing her and whispering in her ear, or about to kiss her cheek. It symbolizes death that speaks to her.

Just before she died at the age of 47, she wrote “I hope the exit is joyful and I hope never to return.”