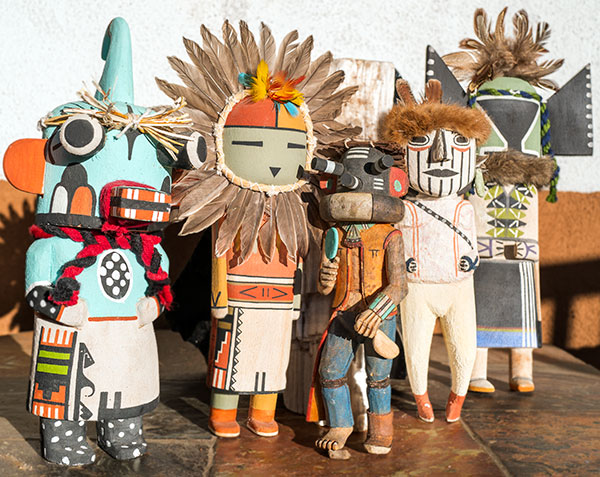 It is beyond coincidence—a spiritual epiphany, that Amy was surprised yesterday by a mysterious visit that coordinated perfectly with her heart and mind.
She is deeply connected with indigenous cultures and yesterday at our gallery, decided to draw a kachina figure from her memory. Before going further, let me explain about kachina dolls: They are figures carved from cottonwood that represent a deified ancestral spirit of Pueblo culture. Most closely associated with the Hopi Tribe, they are highly stylized and once you have seen one, you recognize them forever.

Amy owns a small collection. Last summer at Indian market here in Santa Fe, I bought one from a young Hopi carver, and Amy bought another.

Back to our story: The Hopi Reservation is about 265 miles away from Santa Fe but when Amy had almost finished her drawing, a Hopi fellow came in the door, almost on queue. He had a box of kachinas he had carved. His companion and daughter were with him. The little family was desperate for cash to get back home and Amy bought a figure. The man, Lawrence, described his Kachina. The name is Mocking Kachina, (Kwikwilyaka). He represents a Hopi man that is incomplete but still holds his faith. The Mocking Kachina makes fun of everyone when it appears at the Mixed Kachina Dance. He mocks the actions of anyone who passes within his view.

This carving wears only one shoe and carries a pouch of sacred cornmeal and a ceremonial rattle.
I did research online and found descriptions like this of a ceremony with dancers in the role of Kachinas: "Kwikwilyaka is the Mocking Kachina.  As a clown he has little personality of his own but fastens like a leech onto any activity that catches his eye.  With mirror-like accuracy he will reflect every action of the unfortunate whom he decides to mimic.  He drives the other kachinas such as Hó-e to strong measures to rid themselves of this unwanted echo.  Should a person in the audience become the focus of this undesired attention, he must wait until something else diverts the kachina.  But the wait is very difficult without inadvertently making some movement, and the rapidity of the mocking usually produces gales of laughter from the rest of the audience. During the Bean Dance procession he is a foil for the Hó-e and an annoyance to others." (Barton Wright)

For a good article, see: Kachinas