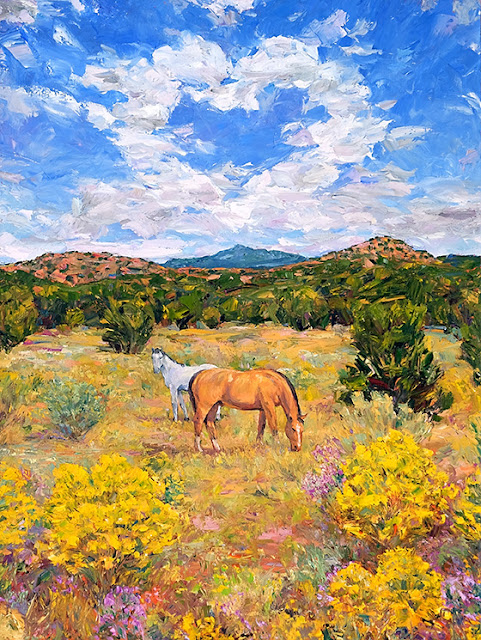 “You channeled that painting.” Amy said, looking intently into my eyes.
We were standing in our kitchen after she came home from a remarkable experience at our gallery. I thought about her words, and wondered “Did I?” Then remembering how the image felt like a baby needing to be born and I had to give birth, I said, “Yes, you are right.”

I have seen images in clouds and made paintings of landscapes with clouds resembling flying geese. I have photographed heart shapes in the formations of clouds drifting over the horizon. Last summer I responded to a yearning to make a large painting that included clouds forming a heart above our terrain—and included two horses, grazing peacefully under the symbolic heavens. 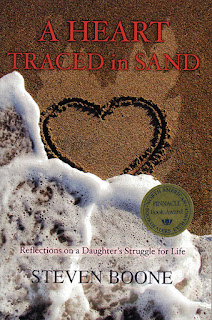 A few days ago Amy came home from work and told me of a remarkable interaction which occurred. A couple arrived to the gallery and within moments revealed some events that had led them to her. The woman, Cyndi, explained they lived in Colorado and she had been browsing at an outdoor rummage sale and saw my book, A Heart Traced In Sand. I wrote it after my daughter Naomi died at age nineteen. It has won two awards and found its way many places. She was immediately drawn to it because of the heart on the cover, and explained that ever since her 11 year old daughter died she had been surprised seeing hearts in strange places and thought the symbol was a sign of love sent by her angel. She took the book home and while reading the story was astounded that our daughters shared similar fates. Each had the same rare form of cancer called Ewing’s Sarcoma.

The book deeply moved Cyndi for our shared narrative.

When she came to Santa Fe with her husband Jim for a get-a-way, they somehow found my gallery to connect with me.

“They are returning to the gallery tomorrow to meet you.” Amy said. “Both loved the painting with the heart in the sky. He said it was too expensive and they found another one they liked. But she really loves the heart one.”

The next day the couple arrived again and I felt warmth immediately. We talked at length about our shared experiences. I learned that their daughter Maggie took 7 months to die before passing away six years ago. Naomi struggled two years and left this world 20 years ago. Like me, Cyndi wrote a book. When little Maggie learned she was terribly ill and might not live, she started a journal. Her mother helped her be brave and know that life goes on after death of the body. The journal became inspiration for the book.

After Maggie died, the parents started a charity in her honor and have helped many terminally ill children be able to receive hospice care and die at home among loved ones.

When it came time to decide on a painting, Cyndi looked longingly at the heart painting. We talked about the symbols; her attraction to the heart in the sky and also the horses. "They are spirit beings and represent freedom and power." I said.
"We own horses." she said.
Meanwhile Jim stood in front of the little landscape painting of sunflowers.
I felt they should have the big piece and decided to come down considerably on the price. They looked at each other knowingly, took a deep breath and said, “We will take it.”

I knew it belonged to them from the time it began in my own heart.

“Today is the anniversary of Maggie’s death.” Cyndi said.

How remarkable that our journeys intersected in such profound ways.

Interestingly, for the last week I have been totally absorbed digging into Naomi’s journals and diaries, and going through photographs and artwork. Soon, A Heart Traced In Sand, Reflections on a Daughter’s Struggle For Life, published in 2001, will become available as an eBook. The eBook version will be able to include examples of her original works, thoughts and historical family photos from her beginning to end.

“Yes,” Amy said, “the painting came from spirit and and arrived to them by spirit.”
I feel the truth in what she says.

In every heart there is a deep sorrow, one that edges in like a whisper on a cold night. The delicacy of a person who is outwardly strong is as delicate as a rose before a frost inwardly. —Naomi Boone, from her journals, age 16
Posted by Steve at Sunday, February 23, 2020
Email ThisBlogThis!Share to TwitterShare to FacebookShare to Pinterest
Labels: A Heart Traced In Sand, birth, cancer, Ewing's Sarcoma, Heart, Journey, landscape, Love, spirit