Fists Against The Wall 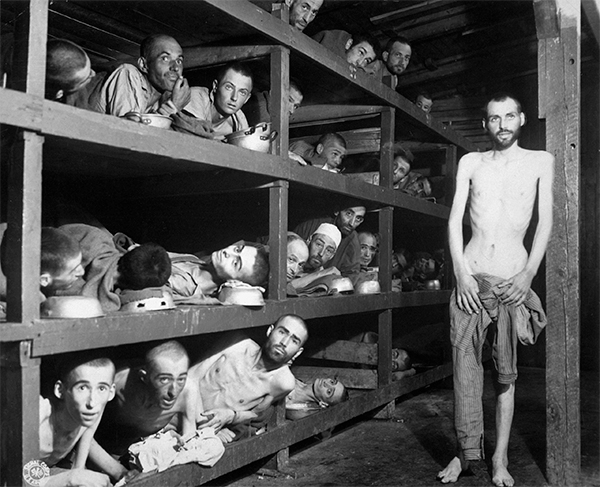 Last weekend was the 75th anniversary of the liberation of Auschwitz, the notorious German concentration camp in Poland where in just two years over 1 million innocent people were put to death: men, women and children. The anniversary comes and goes each year and there are memorial events at the former killing grounds that attract fewer and fewer survivors and many visitors. For some reason, this year I began reviewing more about what happened. In high school, during a period when I read dense and important world literature, I also read The Rise and Fall of the Third Reich, by William Shirer, (1245 pages). It is mostly forgotten in my mind after 50 years.

Amy saw that I was studying and getting emotional about what had happened. She pulled a book off of her bookshelf, a small hardback. Saying nothing, she put it on my dresser. Within a day I had begun reading Night, by Elie Wiesel (September 30, 1928 – July 2, 2016). "In Night," Wiesel said, "I wanted to show the end, the finality of the event. Everything came to an end—man, history, literature, religion, God. There was nothing left. And yet we begin again with night.” ( In the above picture, he is in the second row, seventh from left.) 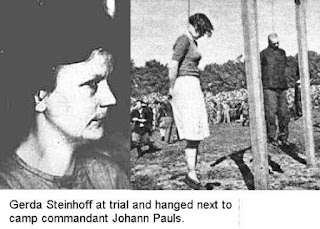 Simultaneously I looked online at pictures of the holocaust and the Nazi perpetrators. Photos of mothers and children being herded off boxcars to take them to the gas chambers, of skeletal forced laborers in horrid conditions, of despicable ghettos imprisoning isolated Jewish populations before being wiped out. I found myself getting angry and researching what became of the Nazi commanders, then seeing them hanged and thinking, “It serves you right.”

“Auschwitz is outside of us, but it is all around us, in the air. The plague has died away, but the infection still lingers and it would be foolish to deny it. Rejection of human solidarity, obtuse and cynical indifference to the suffering of others, abdication of the intellect and of moral sense to the principle of authority, and above all, at the root of everything, a sweeping tide of cowardice, a colossal cowardice which masks itself as warring virtue, love of country and faith in an idea.”
― Primo Levi, (Italian, 31 July 1919 – 11 April 1987)  Auschwitz survivor

I grew up in a non-religious household. No mention was made of God or religion. My father worked hard as a social engineer, alongside Robert Kennedy and Sergeant Shriver. HIs time was spent constructing solutions to injustice and implementing them. Once when a teen-ager and I had recently found God, he quoted Karl Marx to me: “Religion is the opiate of the masses.” I took exception, noting all the good that has come from Christian charity and the spread of principles of equality and love.

At nineteen I became a Baha’i, a religion teaching the essential worth of all religions, and the unity and equality of all people. Established by Baháʼu'lláh , (Persian, November 12, 1817 – May 29, 1892) in 1863, it initially grew in Persia and parts of the Middle East, where it has faced ongoing persecution since its inception.

A beloved Baha’i prayer by Abdul-Baha, the son of Baha’u’llah includes the exhortation, “I will not dwell on the unpleasant things of life, nor will I let trouble harass me .” But what if life itself is cataclysmic without hope? What if there is no pleasantness to enjoy?
Certainly there were those in the concentration camps who had seen their loved ones marched to the gas chambers, had felt the sting of smoke in their eyes from the furnaces incinerating bodies, and lived without hope in wretched unthinkable existence. Some, like Job’s wife might have thought “Curse God and die!” They are forgiven. Wiesel himself, after surviving the death camp spoke in an interview: “Some people who read my first book, Night, they were convinced that I broke with the faith and broke with God. Not at all. I never divorced God. It is because I believed in God that I was angry at God, and still am. The tragedy of the believer, it is deeper than the tragedy of the non-believer.” (See https://onbeing.org/programs/elie-wiesel-the-tragedy-of-the-believer/ )

When my beloved daughter Naomi fell victim to cancer at seventeen, I had to watch her endure her own holocaust. Dreadful pain spread itself in her body. Doctors said she had little chance to live and she began torturous chemotherapy treatments, locked away from the world at large. Many times, during my own “dark night of the soul,” I found myself thinking, beseeching, how could a loving God allow this? Alone, I beat my fists against the wall and wailed.

Naomi had to meet her own point of no return. Many times in fact. Did she not wonder perhaps if God had forgotten her? She once said, “I hope not to die a slow, painful death.” But that is exactly what God had in store for her. That was her fate. She fought hard for life, weeding out any semblance of negative thinking that might interfere with her healing. Yet the slow, inexorable death march toward the gas chamber continued. At one point, exhausted, she sought to take her life and be done with it. Like in the Jimi Hendrix song, Castles Made of Sand, where he sings:

There was a young girl, whose heart was a frown,
'Cause she was crippled for life, and she couldn't speak a sound
And she wished and prayed she could stop living,
So she decided to die
She drew her wheel chair to the edge of the shore, and to her legs she smiled
"You won't hurt me no more"
But then a sight she'd never seen made her jump and say
"Look, a golden winged ship is passing my way"
And it really didn't have to stop, it just kept on going.
And so castles made of sand
Slips into the sea, eventually . . .

One fateful evening in Santa Barbara, California, Naomi swallowed pills, arrived to a lonely beach and walked into the Pacific Ocean to drown. She was saved when she saw a stranger walking and her conscience would not allow her to take her life in front of an innocent person.

She went on to live another seven months before dying at home with peace in her heart. Just before, she had a dream of being on a blissful cruise. In feeble handwriting she managed to write it down on a scrap of paper. 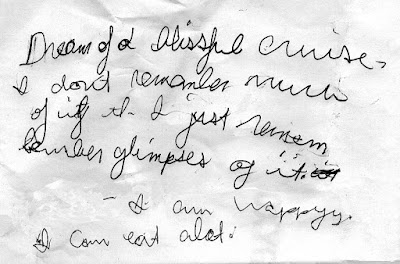 A number of times during the ordeal I found myself down on knees praying fervently for help. I could see the innocents being herded toward the ovens, clutching their little ones and asked, “Please help.” Several times the veils parted and to my surprise I saw angels, in complete tranquility, smiling. Over in a flash, I thought, “but how could you be smiling?”

After Naomi died, we bathed and dressed her in her bed and put a ring on her finger. It is part of the Baha’i ceremony for the deceased. The ring says: “I came forth from God, and return unto Him, detached from all save Him, holding fast to His Name, the Merciful, the Compassionate”.

And this is my belief, that this life is a sort of veil and it is lifted when we die.

For those millions who died during the holocaust, the experience was inscrutable.

Death reaches us all. Some are born and live but a few moments, others longer, but in eternity, this life is but a blink of the eye for everyone.

On that glad night,
in secret, for no one saw me,
nor did I look at anything,
with no other light or guide
than the one that burned in my heart.
This guided me
more surely than the light of noon
to where he was awaiting me
— him I knew so well —
there in a place where no one appeared.

Excerpt:
ST. JOHN OF THE CROSS, 16th Century
The Dark Night of the Soul

Just to say, Steve, well expressed and written. I have read "Night", gave it to someone and purchased another. Now I will read it again.

Yes Barbara, I vaguely remember starting it when I was much younger, but stopping. Now I have read it and feel quite moved. Thanks for commenting.