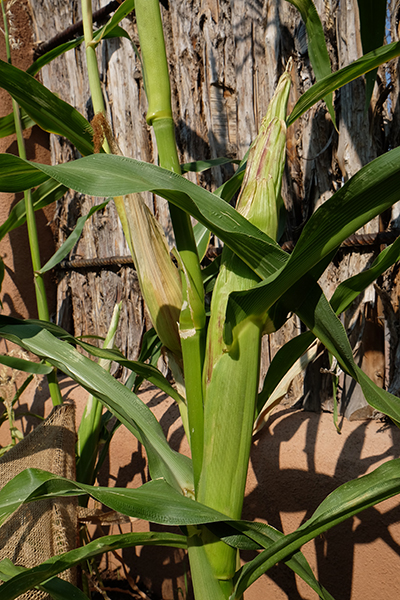 Corn is one of the most venerated of plants in the world. Especially, in Native American culture it plays a central role. “Corn, also called Indian corn or maize, is a cereal plant of the grass family (Poaceae) with edible grain. The domesticated crop originated in the Americas and is one of the most widely distributed of the world’s food crops. Corn is used as livestock feed, as human food, as biofuel, and as raw material in industry. In the United States the colorful variegated strains known as Indian corn are traditionally used in autumn harvest decorations.” —britannica.com 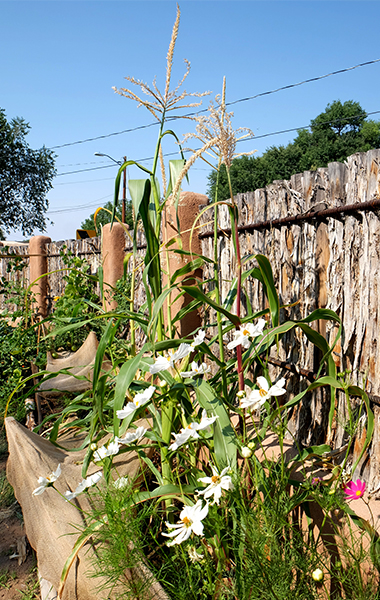 One of my earliest memories is when as a child of two years, my parents would take a drive out of Chicago on Sunday afternoon. I was in the backseat, peering out the window as they drove into farmlands, through corn fields. For a little child, the corn stood immensely tall, in closely knit rows—plant after plant as far as the eye could see. 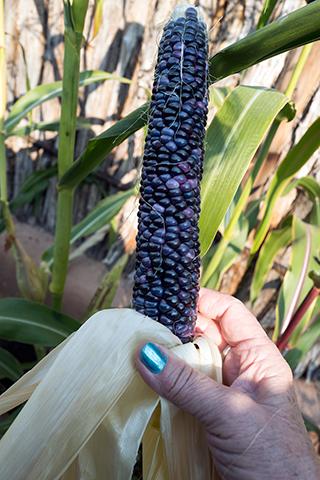 About one year ago, during Santa Fe’s Summer Bandstand, (now cancelled) a Native American artist from Taos performed. Robert Mirabal is well known and well liked. He is a grammy award winning performer, though for the last number of years he has mostly stayed close to home on Taos Pueblo. Anyway, I had a small group of high school friends visiting town and after a social gathering with pizza at the Boone Gallery, we walked out onto the plaza to hear music.

Usually when Robert plays at the end of August, it rains. Last year was no different, with rain coming midway after the concert started. For us Santa Feans, who live in arid high-desert mountains, rain is a good thing anytime. It is as if Robert brings good fortune with him. He talked about his culture and the world and at one point, stepped into the crowd with a big bowl of native corn kernels, giving them away. Amy and I took a palmful.

This spring, we planted a small garden in our front yard, including our blue corn kernels. Blue corn was developed by Hopi Indians of the American southwest.

Our plants grew, with tender loving care, and Amy and I marveled, watching the tender green stalks shoot upward and make tassels, that pollinated from its neighbors. Soon we had corn “ears”.

“We must send Robert pictures”, I commented to Amy one day.