Since moving to Mexico, Amy and I share a studio and make our art side by side. It is a happy arrangement. We listen to music and occasionally look over the shoulder of the other to see what’s happening. She has her own style and so do I. We are different in mind and background when it comes to art. Nonetheless there is plenty of common ground. 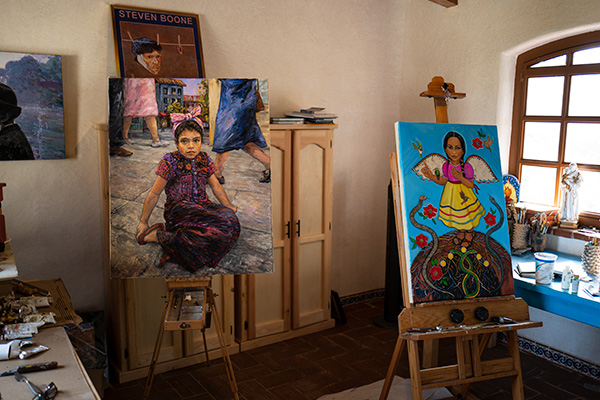 Just today we are finishing paintings. I made a large piece with a native Oaxaca girl as subject. She is someone I saw not long ago. With her sister, she was in the the town center sitting on a sidewalk, selling little drawings and sketches made with colored pencils on paper. Amy and I bought a piece from her older sister. I took photos of both of them and the younger one had a slightly forlorn look. People were walking by without slowing down. The girls were dressed very nicely. My painting is made with oil paints.

Amy is finishing her second of a three part series titled Daughters of Tonantzin. The new work is entitled, “Quinto Sol / Entre Culebras y Colibríes .“ ( Between Snakes and Hummingbirds) A tribute to the power of innocence; and the magic and majesty of the universe.