Visible to the east from our rooftop patio, standing on a mountaintop is Monte Albán, one of the most important archeological sites in all of Mesoamerica. Several times since we moved to Oaxaca ten months ago we have attempted to go and visit, but found a line of vehicles waiting for entry. We turned around and left, choosing to try again later. 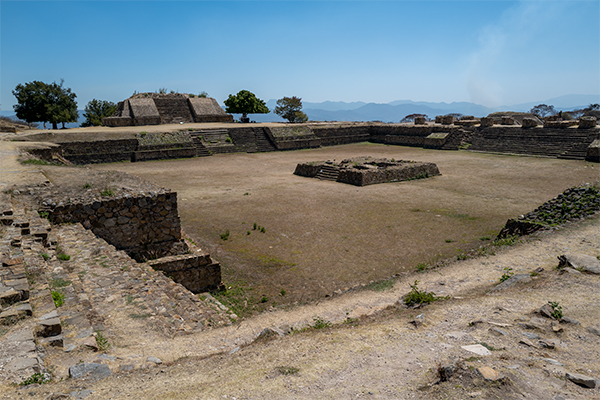 Recently Amy and I received our first guests to our home. Harold and Becky live in Chicago and I have known Harold for over forty years. With Monte Albán close by, we took a chance to go again, hoping for easy entry. Success at 11 AM on Friday!

I felt a happy sense the moment I arrived in the parking lot and climbed a few steps of the ancient place. 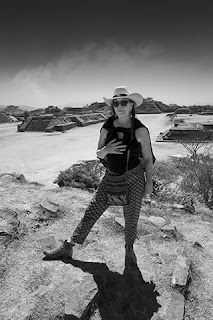 Under blue skies we strolled in the midday heat, experiencing what was a metropolis and capital of the Zapotec people for 13 centuries, between 500 BC and 800 AD. Monte Albán is a world heritage monument and located on a low mountain range overlooking the city of Oaxaca⏤with its surrounding plains and villages.

Exploring the site, I felt exhilarated with inspiration, sensing history and countless footsteps of those who had trod the ground under my feet.

Monte Albán reminded me of another place of exceptional importance I have been to: The Acropolis on Mount Olympus at Athens, Greece. Its most famous structures, such as the Parthenon and Old Temple of Athena were constructed around the same time as Monte Albán. I thought of how remarkable that these very grand construction sites were also lofty places overlooking their surroundings. That meant they were very difficult choices for building sites. And such marvelous monuments were made!
When something grand is made with human determination under extreme difficulty, in order to honor earth and heaven, it is holy.

Now that Amy and I know we can drive up the mountain sides and get to Monte Albán without too much hindrance, we are eager to go back often for inspiration.