Inside Your Darkest Everything 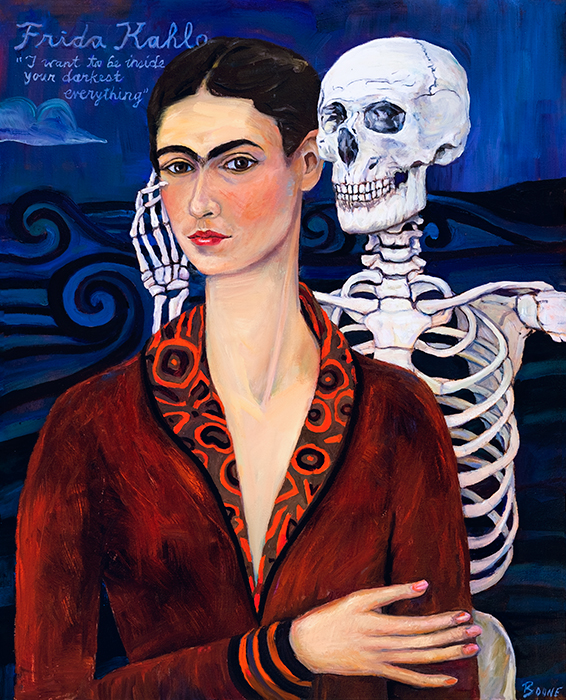 It started a couple of years ago when I made an oil painting of a young Frida Kahlo,_(Mexican,-6 July 1907 – 13 July 1954)with a skeleton whispering in her ear and wrapping his arm around her shoulder. I copied her own self-portrait⏤her first of many, then added a skeleton and a quote of hers: “I want to be inside your darkest everything.” I have tried my hand at painting skeletons and find that I like it.
Amy and I have lived in our home in Oaxaca, Mexico going on one year. There are many festivities during the year, but undoubtedly the biggest, most famous, is Dia de Muertos, or Day of the Dead, that occurs at the beginning of February. Significantly it is time for prayer and remembrance of friends and family members who have died. Its universally observed in Mexico, but also regions with large Mexican populations. In Oaxaca, skeletons and skulls are widely depicted as emblems of death and afterlife, and can be seen year around on walls. 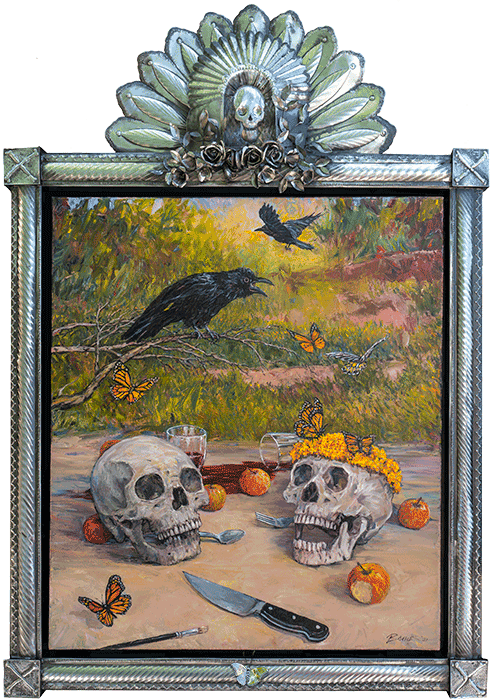 This past year, as Dia de Muertos approached, I had an idea for a painting with skulls. With a bit of trepidation I began work on it. After overcoming some negative emotions, I continued until it was finished. Standing back, I liked it very much and determined not to sell it. It is called "Memento Mori", meaning an object serving as a warning or reminder of death, such as a skull.
My neighbor Mayolo stepped into the picture when he made a fantastic tin frame for me, complete with skulls, crossbones and roses. 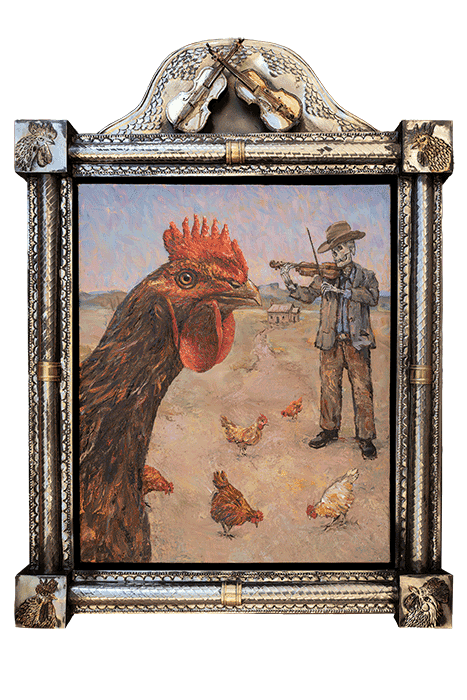 Recently Mayolo made another masterpiece frame for my next muerto painting. It has sculptures and engravings⏤ with incredible filigree work in tin. At the top are two miniature violins with exquisite detail. 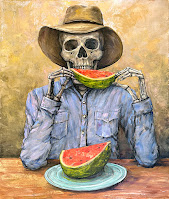 It seems I am in a process of making a series of muerto paintings.
The one to the left is my latest and almost finished. Many ideas come to me.
Twenty one years ago my daughter died of cancer. It has taken me this long to make a painting that includes death as protagonist.
Posted by Steve at Sunday, February 06, 2022
Email ThisBlogThis!Share to TwitterShare to FacebookShare to Pinterest
Labels: death, Dia de Muerto, Frida Kahlo, Memento Mori, muerto, Oaxaca, Paintings, skull, tin frame, warning