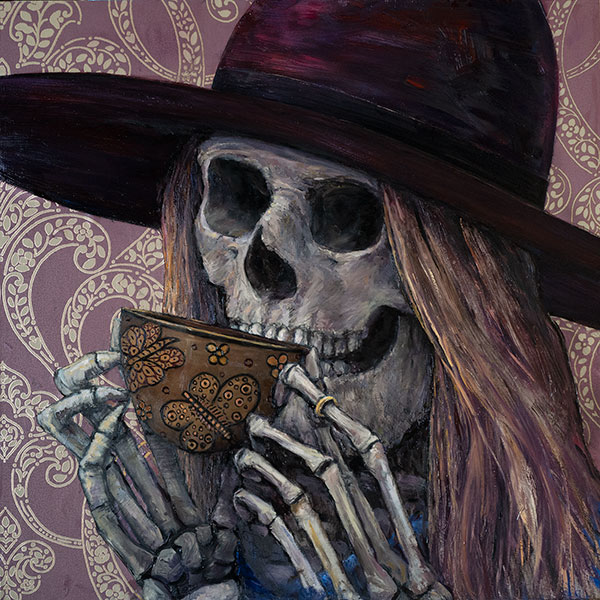 Over the years I have come to realize my best artwork elicits strong reactions and not necessarily favorable. People have cried in front of my paintings. I have been assaulted in fury, with invectives hurled. Folks have swooned.
Most of my career has been as a landscape painter. From the start of life I have been a nature boy. In school I often gazed out the windows to the landscape beyond, wishing to be free as a bird. I am tactile, feeling things to help me connect and understand. Thankfully the world has responded to my creative efforts and I have been able to make a living as an artist all my adult life.

I struggle to make work that pushes boundaries and reaches into human psychology. A painting series called Hangups, begun in 1993 and continued for a decade were faces hanging from clothespins suspended on lines. The images originated in my subconscious. With the contortions and props, they elicited a wide range of emotions, from happiness to comic laughter, frustration, anger and repulsion. One, called Van Gogh All Hung Up, is in the permanent collection of the Foundation Van Gogh, in Arles France.
Here in Oaxaca, Mexico, I have been working on a series of “Memento Mori” paintings. The Latin phrase literally means, "Remember that you must die." Each time I begin work on one, I touch raw feelings such as sadness or grief. Also come feelings of closure, laughter and relief.
The famous French painter Matisse made the statement: “Art should be something like a good armchair in which to rest from physical fatigue.” I say that is not all art must be.

The biggest annual festival in Oaxaca is Dia de Muertos, or Day of the Dead. It is time of remembrance and celebration of souls departure from this earthly existence. Most Mexicans consider death as not just a misfortune but also an ultimate state of liberation. Many positive images associated with the skeleton can be found in Mexican culture.
Skeletons in art have a long history. Some of the most memorable works in my mind are by Albrecht Durer, Pieter Breughel the Elder and Hieronymus Bosch⏤famous artists from medieval times. In the Middle Ages the skeleton started to be used artistically as a personification of Death, i.e. in Dance of Death artworks, and as a symbolic element in other 'macabre' artistic themes with memento mori content, such as the Triumph of Death.
In these contemporary times, the dance of death continues with different plagues: world wide pandemics, global warming and the ensuing natural calamities, wars, famines . . . you get the picture.  Death does not care, it comes to all that live. The skeleton represents spirit released of the body; a medium that connects life and death, conscious and unconscious.
Posted by Steve at Sunday, October 02, 2022
Email ThisBlogThis!Share to TwitterShare to FacebookShare to Pinterest
Labels: artwork, creativity, Dance of Death, Day of the Dead, Dia de Muertos, Hangups, life and death, macabre, Memento Mori, Mexico, Oaxaca, skeleton, skull, Steven Boone art, Triumph of Death, vanitas