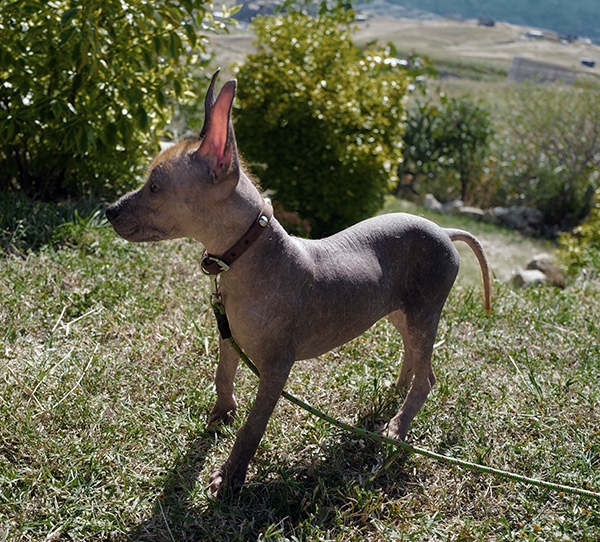 After we moved to Mexico Amy wanted a dog. Not me. I had not owned a dog for over twenty years because I traveled frequently for extended periods.
When I met Amy in 2017 she had an old chihuahua named Unica. It died within a year. We married in 2018 and moved to Oaxaca, Mexico in 2019. Here, especially outside the city, many destitute animals wander around neglected. Three adopted us. It was because we pitied them and fed them. After the first two I told Amy not to show compassion any more. But a starving brown dog was too much for her to look at⏤and then there were three. One was murdered by a roaming alpha male that asserts himself over the vicinity. One we care for cannot be touched. Each has his own set of fears. 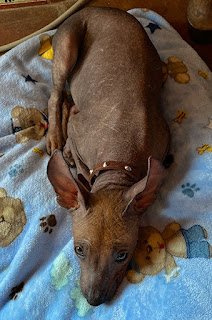 These dogs came to us. But in her heart, Amy wanted the dog that is considered an emblem of Mexico, called Xoloitzcuintle. I had never seen one before moving to Mexico. At first sight I found them rather repulsive. Hairless, wrinkled, with often a tuft of colored hair (moica ) shooting up between their eyes onto the forehead. Amy had an attraction to the Xoloitzcuintle. Maybe because she is a person who deeply feels cultural roots. The name is from the Nahuatl language. Nahua people primarily live in central Mexico and comprise the largest indigenous group. The Aztecs and Toltecs are descendants.

Famous Mexican artists Frida Kahlo and Diego Rivera had several  Xoloitzcuintles. Frida's favorite was “Mr. Xolotl,” after the Aztec canine deity and guardian of the underworld. 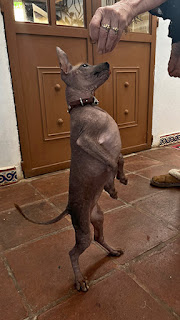 Amy began following online posts about Oaxaca Xoloitzcuintle. We almost bought one, but it was just before a two month trip to the east coast and Europe. While we were gone, our house sitters took care of feeding the “adopted” dogs that showed up at the backdoor each day.

It happened quickly. Amy saw on Facebook that the breeder here in Oaxaca had a puppy for sale. It was available because the people who had asked for it had not responded to phone calls. We went to have a look, meeting at a nearby coffee shop. The breeder, Enrique, arrived late. Opening the front of his jacket, two big ears popped out, then a little face with inquisitive eyes. With a half hour it was done. We drove home with our Xoloitzcuintle. It will be a medium sized female.

So far so good. Her name is Malinalli, a day in the Aztec calendar associated with the god Patecatl. Patecatl is associated with medicine, healing, and fertility. She is the most intelligent animal I have ever had. Curious, attentive, playful and sometimes obstreperous. She trains quickly.

Amy is her favorite. 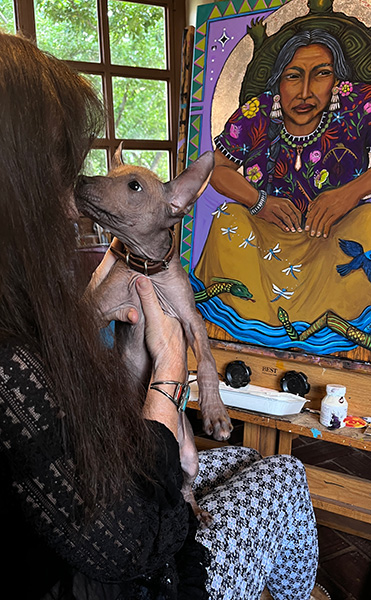