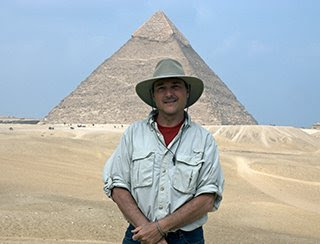 The news from the Middle East has been mostly violent for many years, so I built up some trepidation about visiting. I pictured myself getting nabbed off the street and ransomed as American booty, maybe tortured for good measure. Thus far, my experience in Cairo has been just the opposite. Strangers, who do not know how to speak English, see me and smile, often saying, “welcome.” In THE DREAM, what matters is the heart, and this is the universal language. So I throw myself into the crowded streets, taking pictures as I go, jostling with the common men and women, smiling when someone eyes me in my cowboy hat, grins, waves and says "welcome!”
Women are often covered from head to foot in flowing robes. Younger woman too, have scarfs over their heads. Females do not show flesh. Men sometimes wear loose fitting gowns. Middle-aged and older men often have permanently bruised foreheads. The discoloration is from prostrating so often in prayer. At regular intervals during the day and early evening, chanters from mosques send calls to prayer over loudspeakers into the street. As one prayer subsides, others farther away can be heard continuing the melodic drone.
I joined up with four young Canadians at our hotel and went on a tour of some important places in Cairo. The most exciting part was riding a camel to the foot of the Pyramids in Giza. At that point, our guides were two young locals; Mohammed, the leader, and his protégé Hassan, a youngster who was incredibly nimble around the camels. Mohammed kept a jovial banter in broken English, and occasionally got the camels to kneel down so we could dismount and walk around the incredible expanse surrounding the Egyptian world heritage “wonders of the world.” He was good at taking pictures and skilled using our cameras. Once, as I stood at the base of a pyramid and gazed toward the faraway Cairo skycaps, I faintly heard the call to prayer begin all across the city, drifting like an ancient wail riding upon a magic carpet across the desert sands. It all felt like another part of THE DREAM. 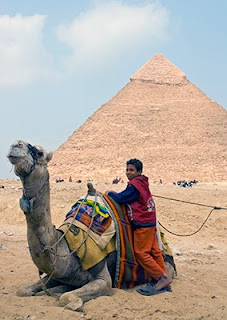 Posted by Steve at Sunday, March 02, 2008
Email ThisBlogThis!Share to TwitterShare to FacebookShare to Pinterest