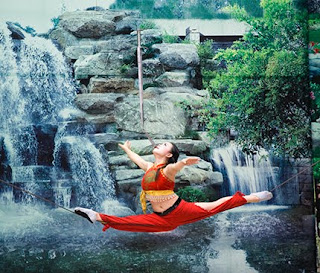 I traveled almost half way around the world to return home to Santa Fe, New Mexico, USA, from Vietnam. The trip took about 24 hours—Saigon to Tokyo to Salt Lake City and then to Santa Fe. I am appreciating the clean air, majestic spaces, relative quiet, and urbane modernity of home. Yet, I miss my friends in the Far East and being in the flux of Asian life.
All humanity is coexisting simultaneously on this planet. Every human activity is occurring at the same moment somewhere: sleeping, eating, working, charity, thievery, sex, birth, death, laughter, argument, et al. Humans are a family, but have great variation in customs, language and ethnicity. Wherever I go, the warmth of a smile and loving look is universally recognized and welcome.
At times I have felt lost and bewildered, almost insane in unfamiliar surroundings. But then, I choose to enjoy the mind-bending experience of seeing life as child; vulnerable, and with innocent, fresh eyes. For example, last Sunday afternoon in Saigon, I took a long walk through the whirling streets and arrived at the city zoo. It is humble by many standards, and does not have the assortment of animals or facilities of many other zoos. I paid my entrance fee, began walking along shady pathways and came to elephants. A small crowd was gathered, and occasionally an animal extended its trunk to grab a sugar cane someone had offered. I took pictures, trying to capture both human and elephant together. Slowly, I wandered around, viewing exhibits. Seeing the hippopotamus reminded me of when I saw them in the wild on Safari in Tanzania last year. I came to a bandstand area where a crowd was gathered watching circus performers. A man onstage climbed on top of an assortment of cylinders and teetered precariously, then an assistant handed him a small sword which he held in his mouth, then took a longer sword and balanced that on the tip of the small one. Next, a beautiful young woman in a tight red costume walked a tightrope, standing on her head, doing splits, and eventually placing a ladder on the rope, climbed up two rungs, then did the sword trick with two swords balanced tip to tip from her mouth. Music played, children ran around in glee, and every time someone spoke, I could not understand a word. As I left the zoo, I had the distinct feeling of being lost in another world, but not caring. The elements played on my mind like a dream and moments flowed in a stream of consciousness that left me dizzy and euphoric. 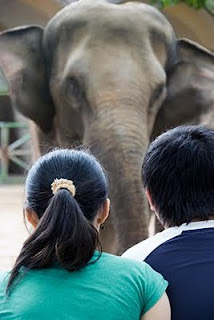