Woven Together Into Eternity 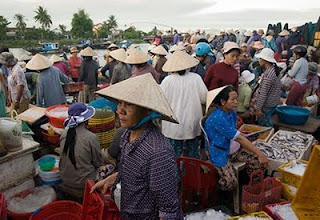 Occasionally, the languid and hot moments in Vietnam seem woven together into an eternity. After two weeks here, a sense of interminable time, and even malaise, surprises me. It is something I have experienced as a traveler, but only in rare, fleeting instances.
Many of the local people in Hoi An stop and simply lay down on the floor where they are at mid-day, and then rest until about 2PM. The heat and jungle climate simply drags me down, and I too rest during the afternoons. My routine is that after the siesta I go to a café and drink a coffee ice shake. A few days of seeing the same people gives opportunities to make friends. The three questions Vietnamese people ask foreigners most often are: Where are you from? How old are you? Are you married?
Today I invited a young woman who works at the café to model for me. She is pretty, and in her broken English complained about her work not giving her enough, so I offered her 20.00 to pose for two hours in traditional dress, which is what she makes in four days normally. Her friend hearing this, exclaimed, “How about me? 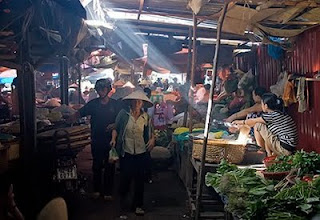 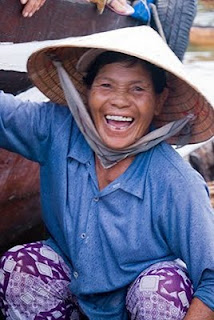 The last two days I have been up at 5 AM and rode my bicycle to the local fish market to watch as local fishermen bring in their hauls to give over to the women gathered in throngs at the pier. It is quite a spectacle of sights, sounds, and smells. Tons of fish trade hands. I’ve seen tuna, mackerel, red snapper, shark, many varieties I do not know, crabs, squid, eel, and more. There is jostling and bickering as everyone is animated and trying to get the best deal. Other vendors are there setting up, including women selling live chickens, vegetable and fruit sellers and even ladies with baskets full of live frogs. I get in the midst of it all and take my pictures. Sometimes someone will stop and pose for me a moment, and I give them money. That can be dangerous though, because eager ladies wanting to pose can mob me. Nobody is dressed fashionably, just working women in work clothes, but what I am looking for is authenticity, not façade . . . and so this genuine place without pretense is perfect for finding what I seek. 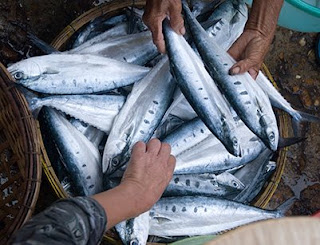