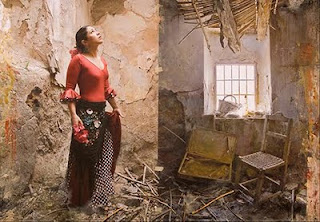 “Why would anyone want that?” "Don’t you want to sell your art?” My friend was trying to be helpful, because she knew my art sales have been meager during the economic downturn. She was looking at a big picture I had just printed . . . of the ruined inside of an abandoned house in Spain. A broken chair and empty suitcase sat forlornly amid the rubble that littered the room. A basket and empty liquor bottle rested on a windowsill where bright light poured through onto the glum interior. I was a bit startled by my friends query, because I had been in my creative process and working by my inspiration, and not thinking of the business angle. “Well,” I said, pointing to portraits on my studio wall, “there are these that people can buy.”
When my friend left, I continued working, and felt slightly crestfallen. What was I doing anyway? The finished work includes the disheveled interior on the right, and on the left in a separate scene, a beautiful, young Spanish woman standing inside a ruined home, holding flowers in her hand and looking up through a hole in the ceiling. The work evokes feelings of loneliness, abandonment, ruin, time, neglect, beauty and hope. 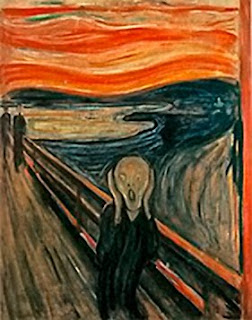 If artists only thought of making “pleasing” art that will quickly sell to a public eager for soothing objects that reinforce their feeling of well-being, then some of the most famous art would never have been made. Look in the art history books, or if you are near a big city, go to an art museum—you will see that some of the most famed art often is unsettling. As an example, take Edvard Munch’s (December 12, 1863 – January 23, 1944) iconic work, The Scream. Do we imagine that he was thinking to make a pleasing picture for someone’s wall and that he could quickly earn cash to buy groceries and more paintbrushes? No, this work came from his inner anxiety and wonderment about the human condition. And his expression touches a nerve in all of us. Similarly, Chaim Soutine (January 13, 1893 – August 9, 1943) was a Russian emigrant, laboring at his art in France and living in poverty, before being discovered by Dr. Albert Barnes (1872 – 1951) , an important American art collector. Soutine worked entirely from his emotions and his visual vocabulary is volcanic. He applied his paint as if in a tumult of recklessness, and with hardly any regard to constructing pleasing shapes or flattering portrayals. Instead, what we get are portraits that convey anxiety and the struggle to stand upright while all of life tries to pull us apart, or melt us in its heat. The paintings Soutine left behind after he died prematurely at the age of 40, hang now in major museums around the world, and continue to shock our sensibilities, but also make us question our perceptions of what is real and true. 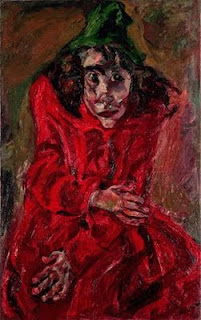