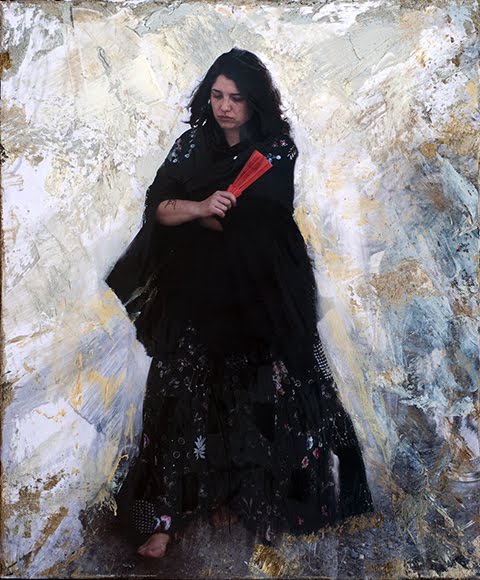 It is said that a picture is worth a thousand words, and a Native American proverb says, “It takes a thousand voices to tell a single story”. Every painting contains stories, and that is the beauty of art—that we can look, and if the artist has been masterful and we are awake to the moment of observance and communion, stories can unfold.
There is a story behind my recent piece, called The Gypsy. It begins when I was visiting my friend Carol, who lives in a tiny mountain village, Darrical, in the region of Spain called Andalusia. Carol is Scottish by birth, but has lived in Spain for years with her German, accordion playing husband, Rolf. They lived a vagabond existence on a boat for years before finding their place in the almost deserted village of Darrical. While I was staying with Carol and Rolf, I met Pepa, a young woman artist who spoke English. Immediately I was struck with her “Spanish” looks—dark hair that flowed in wild rivulets around her broad face, olive skin, sparkling eyes, and an almost fierce proud beauty to her.
Soon we were friends and I wanted her to model for me, for photography, which she gladly agreed to. I told her I wanted her to dress in traditional Spanish garb and she found some dresses that worked, and we took her guitar for additional flavor. 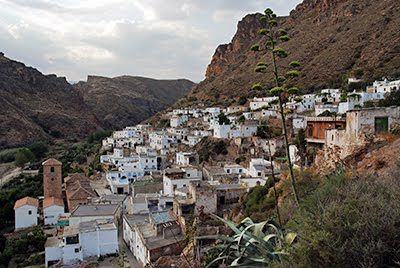 Darrical has many homes that have been abandoned and are in various states of ruin. At one time the government planned to create a dam in the valley and made people move out of their homes before the water rose and flooded them . . . but the dam was never built and the homes remained abandoned. I wandered in and around these places, letting them tell me their stories and feeling the passage of time. Pepa and I spent hours exploring the village ruins and I took hundreds of pictures of her.
Now the pictures are available in my archives and I have begun using them in my artwork. I have developed a method of making mixed-media art that combines digital photography and painting. First I begin with an image I like, and then work on it in Photoshop, sometimes adding layers of abstract nuance. Next it is printed on canvas and stretched onto stretcher bars, like a painting. Then I coat it and paint on it as my imagination inspires me. In the end, a final finish unites all the layers and the art goes to my gallery. The new works are not the landscape painting I am known for, yet, I believe in the old Chinese saying “Perseverance furthers” and by nature I am an adventurer and like to experiment in my art.
Click to see more Steven Boone artwork
Posted by Steve at Sunday, August 15, 2010
Email ThisBlogThis!Share to TwitterShare to FacebookShare to Pinterest
Labels: Andalusia, Gypsy, Spain, Steven Boone Artwork