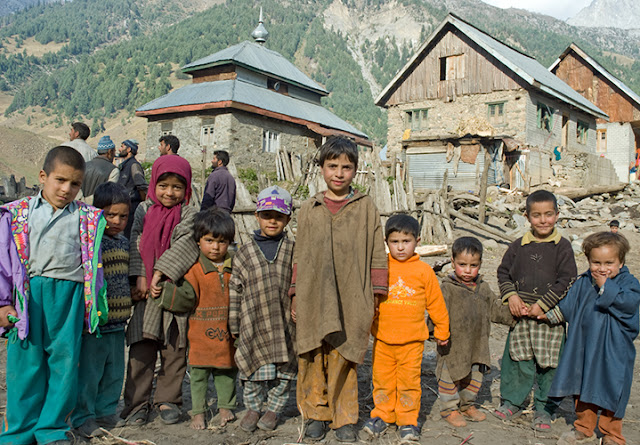 It is said that a picture is worth a thousand words. This picture contains far more than a thousand. In this capture of a moment in time, we are left to marvel at the ragamuffin group of children, standing in a row, holding hands and gazing at us with wonderment. They are mostly dressed in tattered, dirty, used clothes that sometimes do not fit. They are unaware of how they look to a foreigner, and seem happy. In the background, a group of fathers are turned away, looking off in the distance. Some dilapidated homes are behind the children at the foot of tall mountains. The light is clean and fresh, untainted by pollution. The setting is rugged and pristine.

I was living on a houseboat on Dal Lake, near Srinagar in Kashmir, and this day I was with a guide and we drove two hours into the mountains so that I could ride on horseback into magnificent scenery amid snow-capped peaks and verdant valleys of the Himalaya Mountains—where the peaks are the highest in the world. In Sanskrit, the name means, “abode of snow”. The world’s second tallest peak is K2, and is administered by Kashmir. I brought along my paints and canvas, for I am an artist by profession, and on the way, I studied the landscape, looking for a place to make a painting. A small village nestled below the winding road caught my attention and the guide said we could stop there on the way back. After the trek, we arrived, and as we made our way down the dirt track from the highway, I fell in love with the place, especially as I met the people. They were curious of me and did not mind that I set up my easel in the middle of their community to begin painting.

THE DREAM seemed so incredible. Only a week earlier, I had arrived in New Delhi from Africa. Within two days, unexpected events had whisked me away to the far north of India, into Kashmir, and to a houseboat on a lake, where I had a personal servant and complete freedom amid a breathtaking landscape. I could not have planned it any better.

Soon, a group gathered around me to watch. It seemed that I was great entertainment. I decided to paint the houses with their pitched tin roofs and the mountains towering behind them. In the foreground were a wood corral for animals, and an open area where I painted. The children came close, while a few older folk stood respectfully aside, watching as I sketched in the composition and then began laying in color.

My painting gave the villagers a fresh look at their surroundings, and maybe they felt a bit honored that I liked where they lived. At my side I had my camera, and every so often, I turned from my painting and looked into the faces of children gathered around me. I felt blessed to be “a stranger in a strange land”, and yet feel at home in the matrix of existence where every mortal being has its beginning and end.  I made my painting, and also snapped pictures. I could not finish the artwork because the day grew late, but took a photo for reference later.

The children are part of an inter-dependant community. The villagers work with their animals and the countryside, scraping a livelihood. I was there in mid-October and learned that they would soon migrate south to lower elevations for the winter. So the lifestyle is nomadic.

The people speak a Kashmiri dialect, not English. But so much can be said through gestures and a loving attitude. When I motioned that I wanted to take a picture of the kids, they assembled without a word, spontaneously forming a cohesive group to look directly at me. The group of youngsters lined up and held hands instinctively, all of them linked by an unspoken bond of familiarity and love. I did not tell them how to pose. They acted naturally and with perfect ease.

The photo shows some grimy faces, chapped from wind and cold. Obviously, their mothers, using only scissors, do their haircuts. They probably wear the same clothes every day. The village has no electricity, none of the “modern amenities” of the west, and I did not see taps for running water. Instead of material things being important, relationships are key. I imagine that responsibilities are shared, so that even the children feel responsible for one another. They sleep together in small dwellings, rise with the sun, adapt to daunting conditions of nature, are witness to births and deaths, see beloved animals butchered for food and hides, and get little schooling. They are mostly unaware of the world outside their borders.

The earth is close to these people and they show it. I liked the directness that made for some great pictures. The youngsters I call, “Star Children”, because their eyes are unclouded and shine like the bright evening stars.

Kashmir is 97% Muslim, so females cover their heads with a scarf. Many centuries ago, Kashmir was home to the Hindu religion, then Buddhism, but eventually became ruled by adherents of Islam.
Kashmiri cuisine includes boiled potatoes with heavy amounts of spice, cottage cheese, lamb cooked in heavy spices, lamb cooked in curd with mild spices, spinach, minced meat balls in tomato and curd curry, and the traditional feast involves cooking meat or vegetables, usually mutton, in several different ways. It is the first time I had tea with salt, a popular drink.

When we packed my paints and left the village, the air was cooling rapidly and the sun had disappeared behind the mountain walls. We drove the narrow rode toward Srinagar, and I felt happy. I leaned far out the passenger window and took pictures of the landscape flashing by. The blur adds a soft effect that can be romantic . . . losing details and indicating how elements meld together in simple shapes and colors. Later, I downloaded my pictures onto my computer, and now I marvel that THE DREAM had provided me such an unexpected and fulfilling experience in Kashmir.

This article is "one thousand words".
Here are a couple more pictures from the same day: 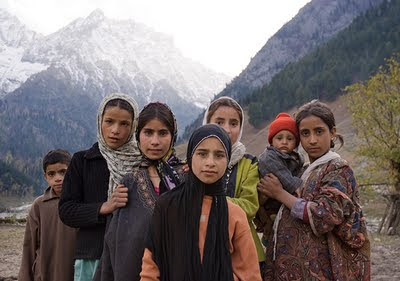 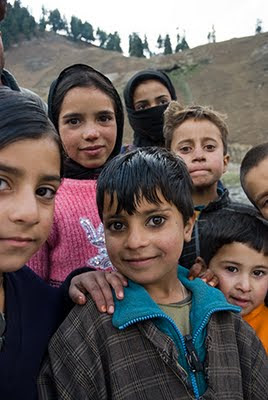 See more artistic photography from Steven Boone, including photos from around the world and Kashmir at Graphixshoot.com