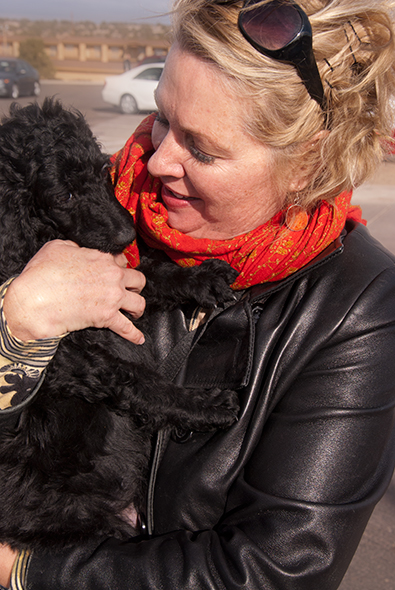 Heidi Of The Mountains exclaimed, “We will have a dog for our gallery!” We were visiting a prominent Santa Fe gallery during a Friday night exhibit, and Heidi had spied the gallery dog, a white poodle, sprawled in the office.

The thought stayed with her, and occasionally, I made slight objections. Not long ago, I lived fancy free, traveling extensively, and while I like pets, I had made a choice to regard my freedom first. Now, our main priority is to establish our business, The Steven Boone Gallery.

Pedigree dogs can be expensive, but Heidi Of The Mountains puts energy into achieving her goals, so when I finally agreed to a pet, she set a financial target for holiday sales in order to win her reward of a poodle. We began looking for a breeder with puppies, and I found one in West Texas. When Heidi met her goals, she was elated and we called to ask about the poodle pups. Out of a litter of ten, two boys remained, and we chose one, based upon pictures.

Today, we drove two hours east to Santa Rosa, New Mexico, as the breeder drove two hours west from her home. We met, picked up the puppy and now he is home. A couple days ago, Heidi pondered what we should name him. I suggested naming him after a river, and thought of our local Chama River. Then a young friend of ours mentioned that in her home country of Venezuela, it would be more appropriate to call our dog Chamo, meaning “little boy.”  So there we have it. It all began with an affirmation.