Poets sometimes shuffle evocative photographs in front of their eyes to stimulate associations and gain new ideas for poems. Pictures contain stories, but it is up to the viewer to supply the text.
I have over thirty thousand photos in my files, so imagine how many poems could be written. Here are a few to talk about: This photo was taken while I sat in a car on a street in Agra, India, home to the famous Taj Majal. I was waiting for someone and my window was down. A woman spied me and approached, pushing a young girl ahead. They could see I was “western” and supposed that I had money to give them. The child stood in front like a soldier, just as the mother expected her to be, and wore a pitiful expression of fear, despair and blight. The woman reached out her hand and on her face was a mixture of pain and hardness, with a wild look in her eyes, ready to devour—even as she devoured the life of the child. 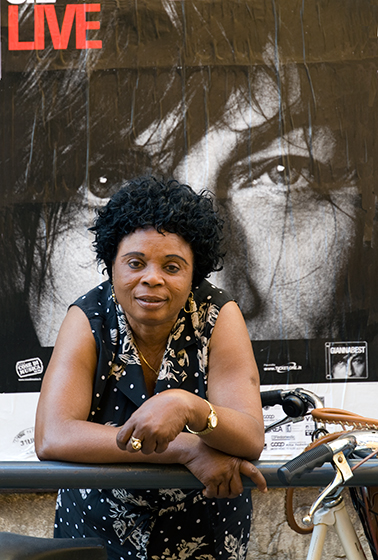 I have spent endless hours roaming streets with my camera, not knowing what I am looking for, keeping my eyes wide open for an unexpected moment to surprise me. While in Florence, Italy one afternoon, I happened by this black woman leaning on a railing. Behind her was a huge poster of a white woman, some kind of artist. I looked into the woman’s face and saw she had scarification typical of parts of Africa. I enjoy those beauty emblems, and we gazed at each other before I snapped her picture. She is obviously content with herself, and bemused that I would stop to photograph her—and in that moment, she is the real star of the show. 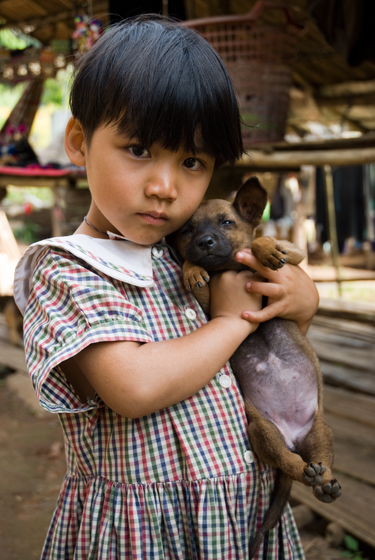 The last picture was taken in the mountains outside of Chiang Mai, Thailand, where I stopped in a village along the way to a sojourn in the jungle to ride an elephant. As I was walking on a narrow trail, I passed a little girl, holding her puppy. The sight was beautiful, and immediately I sought the best view for a picture that had to be taken fast. I dropped to my knees so as to be at eye level with the child. She obliged by standing still and gazing at me with her arms wrapped around the dangling puppy.