Society likes definitions, to better categorize and compartmentalize facts into groups and classes. Professions are built upon specific training that produces skilled workers who are given diplomas in arts and sciences. Usually, a class of professionals, such as physicians, has subclasses, i.e. internist, ophthalmologist, gastroenterologist, etc. In art, the categories are fewer, but there are sculptors, painters, performance artists, installation artists, and more. It is generally accepted that an artist finds his passion, develops his skill and becomes known for his excellence within his class of discipline. When the public becomes accustomed to the pleasure of his work, they eagerly anticipate new productions that recall past accomplishments. The more famous the artist, the more public taste demands a recognizable product.

Creativity and commerce can be a difficult marriage. For instance, Norman Rockwell (February 3, 1894 – November 8, 1978) became a beloved American artist because he so deftly and expertly conveyed in his paintings homespun American values and warmth—and the images were reproduced frequently in magazines and posters. But imagine the outcry if he were suddenly to abandon his former path and take up another, say, abstract expressionism.  For the most part, society is about favor and taste, not creativity. That is why so many artists have endured hardship—pursuing visions that often take years before society accepts.

When the impressionists first produced their remarkable paintings in France, they were snubbed and spent years in poverty, because public taste was for academic realism with a historical narrative bias. By passion and enthusiasm, they persevered, until gradually their work was accepted and praised. In art history, this theme of misunderstood art has been a common one.

Occasionally, an artist becomes famous as much for his creative personality as his art. Pablo Picasso (25 October 1881 – 8 April 1973) for instance, could pursue many different styles and tangents, and the public followed along with his “genius.”

The problem for many artists is that it takes years to develop a mature style, and would take more years to change. I have been restless explorer from the start, and have not been willing to follow the commercial advice to find a personal style and make a niche market. I can’t live in a niche. I try many approaches, knowing that I must investigate the unknown. For the most part, I am known for my landscape paintings, but I also explore photography, mixed media, portraiture, drawing, and abstract art. 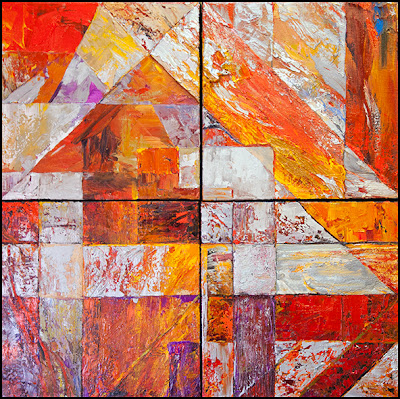 This week, I made an abstract painting (seen above at top of page), which then became part of an assemblage of three other paintings and transformed into one 24 x 24 inch artwork. Each piece can stand on its own as an abstract, and together, all the pieces make a whole.
Posted by Steve at Sunday, January 01, 2012
Email ThisBlogThis!Share to TwitterShare to FacebookShare to Pinterest
Labels: abstract art, Art, Art and artists, Exploration, freedom, Society and art