The word portal is at once familiar and mysterious; herein is its charm. When we come to a portal, we are at a threshold. We may be at a doorway that leads from a familiar interior to an outdoors that is limitless and leads to places unknown. Or it may be the reverse, coming from the wild outdoors of bustling streets or primitive forests, to an entrance that welcomes us to the comfort and safety of home. Portals have great variety. In ancient days, most cities were surrounded by walls, and great gates were portals to and from the interior. These days, websites can act as a portal to other domains through links that are gateways. 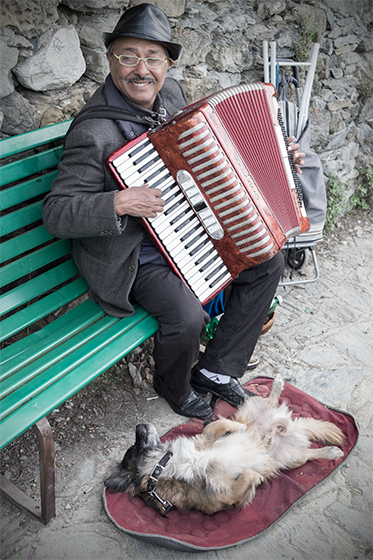 I love experiences that are portals. I have been through many gates, and crossed countless thresholds around the world. Many times I have crossed into the unknown and always felt a thrill at the possibility of surprise and learning something new. Portal experiences function this way—taking us from something known into the realm of spirit, where borders are more obscure and our frame of mind shifts to something new. Such an experience can take us into the heart of creation and the center of our own being.

I have a simple example of just such a portal experience. It occurred last October while hiking outside of Vernazza, Italy, one of the five villages of Cinqueterra, on the Italian Riviera. I was with a friend, walking along a narrow dirt trail hugging a mountainside, with the Ligurian Sea just below us. We had followed the path up and down slopes, amid vineyards and flowering shrubs, when we turned and abruptly came to a man sitting on a bench, accordion on his lap with his dog laying on a rug at his feet. He had the look of old world gypsy—dark, with rumpled but stylish clothing, and a little mustache that perched on his upper lip. Wearing eye glasses under black leather cap, and smiling amiably when he saw us, he began playing his red accordion. His dog rolled onto its back, spreading his legs and putting all four feet up in the air, absolutely content and relishing the music on a fine fall day with the sunshine warming the earth.

At the sudden sight of the old-world gypsy and his dog, and the sound of the first notes of the accordion, I was entering a portal. A realm of wonder and enchantment opened before me. My breathing became deeper and I felt rested and gay. Although in a foreign land on foreign soil, an ancient recognition stirred in my breast. I had stepped through the portal and was in wonderment, spellbound by magic. We stood near and listened to the music, and I made a film with my camera video.
Posted by Steve at Sunday, March 06, 2016
Email ThisBlogThis!Share to TwitterShare to FacebookShare to Pinterest
Labels: accordion, Cinqueterra, gate, Gypsy, happy, Ligurian Sea, portal