When you were born, you cried and the world rejoiced. Live your life so that when you die, the world cries and you rejoice.  -Cherokee Indian proverb

I often am inspired by ordinary people who make the most of life.  Like Albert, the old man who arrives at my health club. He is almost a hunchback and walks bent over almost in half. He is cordial with everyone and smiles. In the locker room he always shares a new joke. In the swimming pool he jogs in the water, sometimes stopping to tell another joke to someone. His warmth will make a stranger smile. Albert likes to lift people with laughter.

Another guy shows up walking slowly, painfully, with legs swollen from rheumatoid arthritis. Furthermore, his eyes are failing. He is younger than me. We have chatted at times, and I learned he teaches philosophy. The other day I got dressed by my locker. Putting on my shirt, just as my hand came out from the sleeve it poked him in the nose as he was passing by from behind me. We both laughed. I like that he laughed about it.

I go to Starbucks for coffee. The shop is just a block from my gallery. A woman in her thirties works there and sometimes when I am in line, I watch the staff. I found I liked this person especially. She is husky and a bit overweight, but attractive and a good worker. A while ago I was in line and when the woman in front of me was about to order I heard a brief conversation between the two. The Starbucks woman explained that she is pregnant with twins. The father is out of the picture. She will have to go to Colorado to be near her sister soon. That was about two months ago and since then I have talked with her a bit. She is getting very heavy with two babies inside, and works just as hard. One day I gave her 40.00 dollars and told her I appreciated her showing up at work with a positive attitude. She beamed and told me I was sweet and, "made her day."
Today I went in for coffee and waited in line. She was busy and did not see me while somebody else served the coffee. Before turning to go I called out to her. She looked up and smiled broadly. It was like the sun coming from behind clouds, brightening the room with dazzling light. 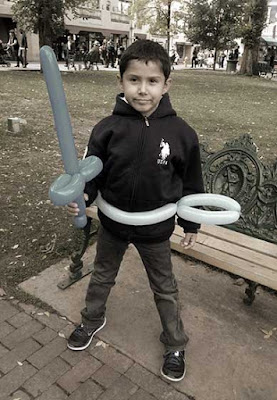 Later, I took a break and went outdoors on the plaza and sat on a bench near a guy who was entertaining people by blowing balloons—then stretching them into marvelous shapes. He dressed modestly and kept up a banter among passers-by. A little boy came up, wide eyed. The balloon man asked what he wanted, "an animal, space ship, bow and arrow?" The boy stood speechless. "I know, how about a sword?" The boy nodded. Within moments, a purple sword was handed over. "But wait," the magician said. In one fluid movement he made a circle of a balloon and pulled it down over the child's head, then twisted it at his waist. Taking the sword from the boys hand he put it in the newly formed scabbard. The boy lit up and breathless with excitement ran across the plaza to his parents. "Wow," I said, "he was too excited to say thank you!" 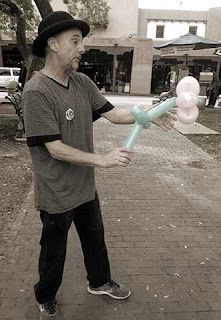 Within moments, the boy and his little sister were coming back. As he approached I called to him, "Are you going to say thank you?" Sheepishly he said the words, almost under his breath. Soon the man had made the little girl a flower and presented it to her as if to a queen. The children ran off again. No money had exchanged hands. Pulling out my wallet I gave him a bill. "Oh gosh, thank you!" he said, "I depend on donations." 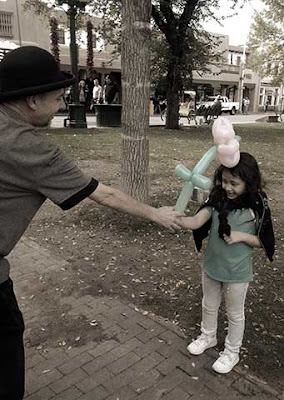