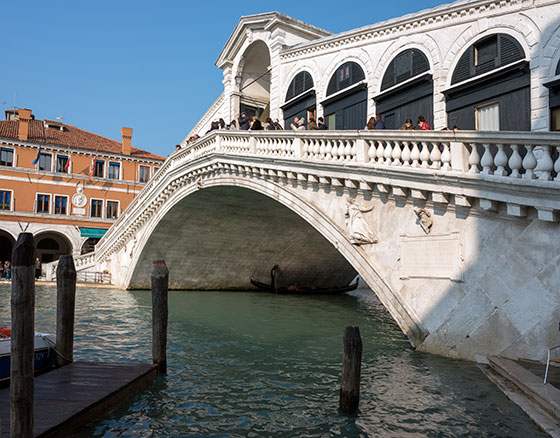 My first week of one month in Venice seems to have flown by quickly. Sometimes I want to grab the moments and make time stand still. I feel I am in a special situation—living in a city I love, one that people the world over are attracted to visit. 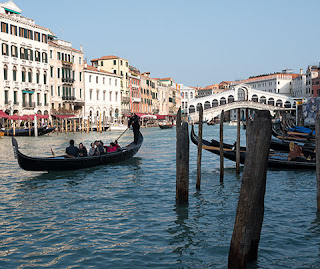 From my apartment overlooking a busy "calli" or pedestrian avenue, I walk down a flight of stairs and open a door to the heart of the city. Within moments I am at Rialto Bridge, the main walkway across the Grand Canal which divides Venice and also serves as perhaps the grandest thoroughfare in the world.

Water busses, called vaporetto, travel up and down the Grand Canal, taking passengers. I have a boarding pass that I brought along from my previous stay but to my surprise I have barely used it. I am walking instead.

Today has been typical. I woke from nine hours of sleep at about 9 o'clock, made breakfast with eggs 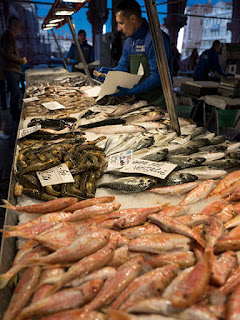 and prosciutto ham, and coffee. Then to the fish market, which is the main one, and only a couple minutes away. This being Saturday, it was very busy. I chose the fish stall I like best and waited in the
crush of people, with my eye on some fresh "pesci". As I stood, something caught my attention—some of the fish were still alive and thrashing around on the ice. I felt a pang of sorrow for the little creature taken from the sea and dying in front of my eyes. A woman next to me bought a wide assortment of fish, squid and lobster. I imagined she owned a restaurant or something. Next I went to a nearby stall selling vegetables and bought fresh broccoli.

I was now very near the Rialto bridge, and went to take some photos. I have developed an odd hobby. I take pictures of people taking "selfie" pictures. If I stood on the bridge from morning until night I could probably make about 1000 photos of people, mostly couples, taking pictures of themselves, most often using poles with their smartphones attached. Some folks get a bit annoyed that I am in on their intimate moment, but today a Chinese man had a good laugh when he saw me taking a picture of him and his friend taking a picture of themselves. 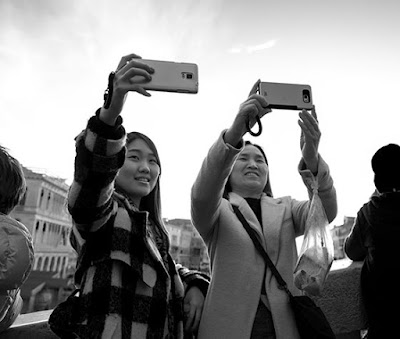 On the way back, I stopped for a "pasticceria" pastry and "macchiatto," a type of expresso coffee with dollop of foamed milk on top.

Back at the apartment, I got back to work on a painting I am making. I bought my linen canvas at a local art supply store I like. In my kitchen I work on a sturdy marble table under good light, with additional light from windows nearby. Mid afternoon I stopped to nap for about forty minutes.

Usually, just before sunset I go out walking and take photos. Yesterday I took some pictures of gondolas moored along the Grand Canal, their silver prows gleaming in the fading light. But now, my painting was demanding attention so I did not go out. I finished the first stage, called an underpainting. The subject is from a photo I took of a "ponti" or small bridge over a canal. It is stone and just at the top two women are lounging. Behind them tall old buildings loom upward in the darkening twilight. Some windows are lit with a warm glow, and a street disappears behind.

Dinner was the fish and broccoli.