In the early evening, my brother and I walked up to the long line of people at the Icelandair ticket desk at Dulles International Airport outside of Washington DC. He glanced above the counter and noticed a sign with a number that said "flight cancelled". "Is that your flight?" While I stood at the end of the line with my luggage, I checked my itinerary. It was.

I was heading off to Paris after visiting with him and his family for a few days. I only had a short while in Paris before I was to arrive in Venice, Italy for a month. Venice beckoned me with its season of "nebbia" or fog. Now, I was in another kind of fog.

My brother went to watch at the ticket counter and reported back that people were being re-routed and given hotel rooms for the night. We hugged goodbye.

By the time I arrived at the desk, the agent was obviously frustrated and edgy. She gave me a flight on Air France for the following evening—24 hours later. With a hotel and meal vouchers. I felt at a loss, as if in a muddle. The path in front of me became more obscure that evening as I checked online and could not locate my itinerary. I tried calling Icelandair. The calls kept dropping. When I reached a bot, it said 80 people were in front of me. It was around midnight. I hung up and crashed.


The next day I arrived in Paris, delayed by about thirty hours. I took the metro railway from the airport and arrived at Hotel Saint Andre Des Arts, a place I have stayed before. In the lobby I was greeted by Fred, the desk manager who remembered me warmly. The fog receded.

I had planned to go to Versailles, the former seat of political power in the Kingdom of France from 1682, when King Louis XIV reigned. Now I lacked time, having two days instead of three. So I did what I love best: wandered the city and made street photographs. 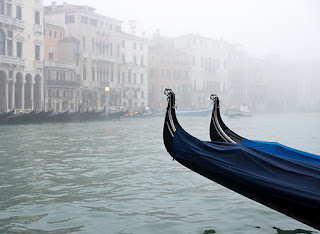 Now I am in Venice. My apartment is in a lively central neighborhood, close to the famous Rialto Bridge that spans the Grand Canal.

My second night here was Friday. I fell asleep but was wakened by lively people walking on the pavement below my window. Weekend nights produce more revelers into the early morning hours. I could not fall back to sleep. Eventually I moved to a small bedroom in the apartment rear and flopped onto a tiny bed.

At eight in the morning I was wakened by a text alert. It was my friend Cristiana: "Nebbia right now."

What a happy surprise so soon! 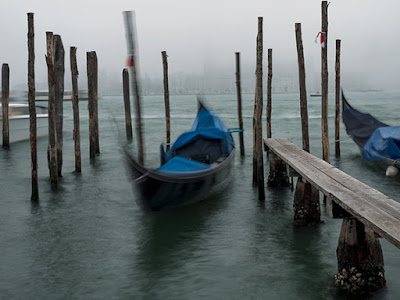