A Sense Of Gladness 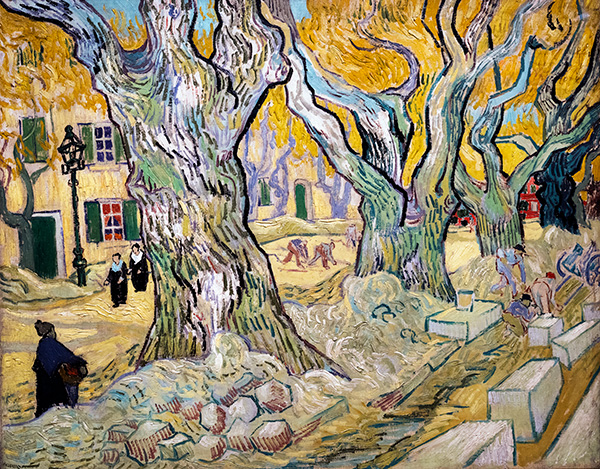 I was on a metro train streaming underneath Washington DC from my brother's house in Maryland when I began seeing familiar stops. (I grew up in DC.) My plan was to go to the Washington Monument and the National Mall to re-visit the broad spaces and wondrous memorials. As the train approached Dupont Circle, on a whim I decided to get off and walk the familiar streets, something I have done only a few times in the last forty years. Soon I was at The Phillips Gallery, standing in front of a Vincent Van Gogh painting. How wonderful! As if a great gift had been thrust into my life. Van Gogh made the painting using his famous slashing bold strokes of color. It depicts workmen in a rural village during autumn, toiling under trees brilliant with yellow leaves. Houses are nearby, with women dressed in black walking by. The masterpiece bursts with energy.
Last time I was at the Phillips Gallery an entry fee was in effect. Now it is free. A sense of gladness filled my soul. I could walk away from the Van Gogh, go downstairs and sit in a room that was like a chapel—filled with Mark Rothko large sized color field paintings. Or I could go upstairs and visit one of the most famous of Auguste Renoir's oil paintings—the impressionist masterpiece called Luncheon of The Boating Party. 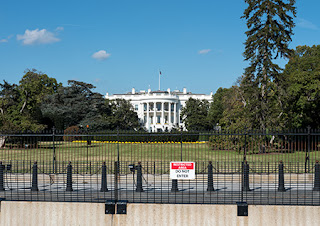 Back on the pavement, I walked about a mile to the mall, seeing familiar streets and corners along the way. I passed the Corcoran Gallery of Art, where I took art classes on weekends as a teenager. In a few minutes I came to grassy fields and a crowd of people—mostly Chinese tourists. They were animated. Looking in the direction they were aiming their phones and cameras, I saw the south side of the White House. Surrounded by barriers and immaculate grounds, it seemed lonely and far removed from public life.


The next day, Friday, my brother took off from work to join me in taking an art odyssey. Together we went to one of my favorite museums in the world—The National Gallery of Art. By good fortune a spectacular special exhibit called Vermeer and the Masters of Genre Painting was being featured. First, my brother wanted to see early gothic and renaissance art (12th century AD - to about 1527). He is not religious so I was mildly surprised. Yet he stood in front of many of the paintings, slowly admiring the fine details, gold leaf, and sacred storytelling. Me too. I could see Rembrandt masterpieces across the hall and made my way there to stand in awestruck rapture. I imagined the past breathing its secrets into the present. Suddenly it occurred to me, gazing at a delicately painted hand, how often in my earlier years I had studied it. 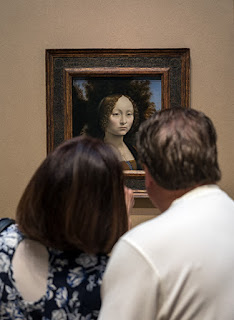 The Vermeer exhibit was like icing on the cake. It is an ultimate gift to stand so close to masterpieces of another age in human history. 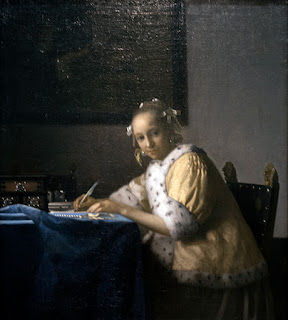 Wade left me for an appointment late in the afternoon. I remained in the museum, wandering among the deep and glorious collection of art.

Tonight I leave for Paris.