There are days that I call three-in-one days. They usually occur while I am traveling. Events are so fantastic and magical that they embed in my psyche indelibly and deeply, filling my being in such a satisfying way that I swear I have lived three days in the span of one. Yesterday was like that.

It began before dawn when I am typically asleep. I woke, made breakfast and coffee, then walked in the dark along the dirt road on the west bank of the Nile River in Luxor. In a few minutes I arrived at my Egyptian brother Hegag’s home. It was quiet and a light shone from within. The doors are never closed so I stepped to the passage. Edleah, Hegag’s wife came forward from the back and motioned me to sit inside. Hegag soon appeared and we sat drinking hibiscus tea. Edleah’s brother, Adil, came with a car. We set out driving in twilight.

I was in the back seat, noticing the earthen homes, sugar cane fields, and morning haze—vapors from the canals by the fields. We reached a rundown paved road and took off as the sun rose behind us. It came up glowing orange behind distant blue mountains.

People appeared along the way, beginning their daily tasks . . . turbaned men in Jellabiya, the loose gown that flows down to the feet, and women in hijab’s and scarves covering their head.

We were going to Isna, where a big Saturday souk for trading animals occurs. The ride would have taken less than an hour, but speed humps to slow down traffic caused Adil to brake often. It took about an hour and half. At Isna we had to ask directions. Hegag said the location changes week to week. We knew we arrived when we could go no further because of the crowd. 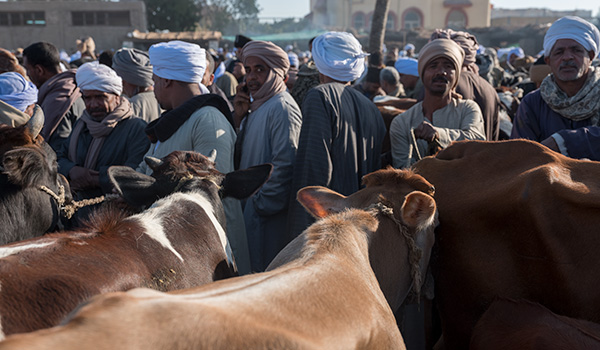 Hegag and I set out walking with Adil staying behind. Within a minute we were in a crush of men and animals. I had my camera in hand and was so dazzled by the scene I began snapping photos left and right. Hegag kept close watch over me, keeping me from being trampled by buffalo, camel or cow, and making sure I was free, but tethered to him. 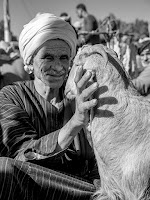 Big masculine energy abounded with carousing, exclamations, excitement, joking, shouting, and fraternity. I knew I was the only “different” one, and thought a couple times this was no place for wimps. But SPIRIT was holding sway and I pointed my camera and shot. Sometimes, a man or boy wanted his picture taken next to a friend or holding a beast. Occasionally I would hear “hello”, or “welcome”. I gave a lot of thumbs up and pressed flesh with the guys. 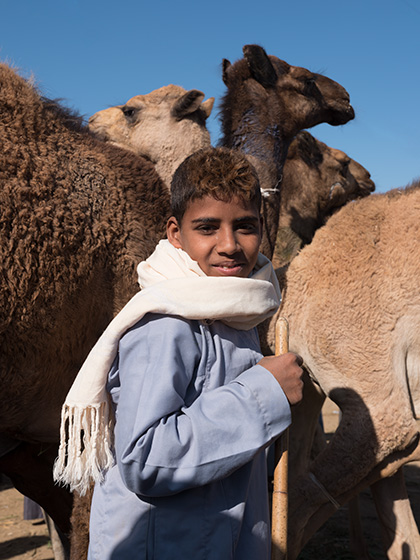 We took a break for tea and falafel lunch with pita bread, then we dove in one more time. I wondered about the complete absence of women. Hegag said it was not their job to buy and sell animals. “If a woman’s husband dies, and she needs to sell an animal, she gets a neighbor, or relative to help.”
He showed me where animals were being butchered and I walked in bloody mud while the butcher posed with his long blades in front of hanging carcasses.

As we began the drive back, I told Hegag, OK, the long drive was worth it.

I joked with Adil about all the humps home. 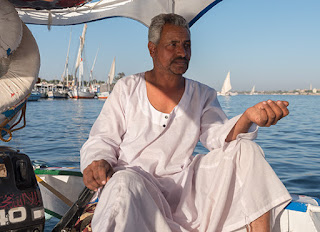 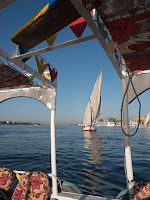 Late afternoon my other Egyptian brother, Abu’l Ezz met me by the Nile and off we went in his motorboat to cruise at sunset. “This is your boat! Any time!” he said, grinning. “Are you happy?’ I said yes, and he replied, “Then I am very very, very, happy!” Indeed I felt happy—languidly floating on my favorite river in the world, chasing after felluca, the traditional Nile River sailboats. Ezz would align us for just the right pictures. I especially enjoyed seeing the felluca with the sun going down behind them.

When the sun set and Ezz took me back to the river bank outside my flat, he asked me to come to dinner the next day, after another boating at sunset. I look forward to being in his earth home with his children and served a tasty Egyptian supper prepared by Saida, the best cook in Luxor. 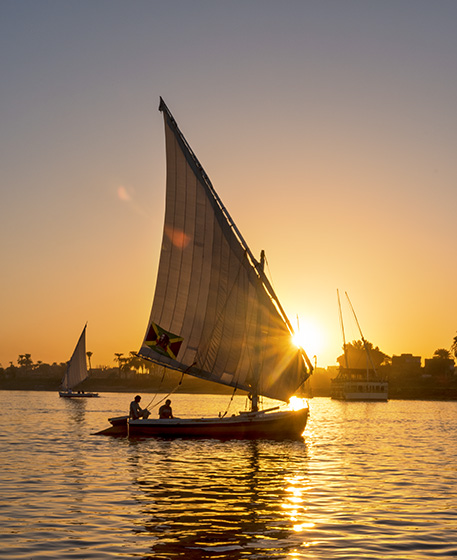 When I reached my flat, I made dinner. Walking back to Hegag’s home for tea I thought . . . OK this has been one of those three days in one.
Posted by Steve at Sunday, December 17, 2017
Email ThisBlogThis!Share to TwitterShare to FacebookShare to Pinterest
Labels: Egypt, Felluca, Friendship, Isna, Nile River, souk

WOW!! What Full Day of Fun Steven! I understand why you refer to it as a 3 in 1 Day!Fabulous experiences!!