Each day has its own incredible uniqueness. I find it best to live in THE DREAM consciousness. That way, when I have weird experiences that are bewildering and a bit dark, I am easy about it and say Oh wow, look what THE DREAM is doing now!

Last Thursday morning Cristiana and I arranged to go on the train to Vicenza to see a special Vincent VanGogh exhibition. She had to push back our departure to noon because of some urgent business. A text had arrived and a business paper had to be finished that day and mailed at the post office.

As I headed out walking under a cloudy sky on a cold day, she called and said she could not meet me at the station. “Unbelievable” she said, “the post office is not there anymore. I have to go to another one. I am sorry I cannot go with you.” OK, so now I am going by myself.


I felt happy anyway. At the train station I bought my ticket to Vicenza and the return ticket as well. The trip took about an hour. In Vicenza, I asked a cab driver about getting to the Basilica Palladiana. He told me I could walk, it was not far. In ten minutes I was there. The building is grand and famous—a Renaissance structure designed by a young architect Andrea Palladio (Italian, 30 November 1508 – 19 August 1580), whose work had a significant effect on the field during the Renaissance and later periods.


The exhibit, VAN GOGH, Between the Wheat and Sky, is an important reconstruction of Van Gogh’s art work. From hopeful beginnings, with drawings of peasants and nature, to life in France with loosening of strictures and embracing of vibrant strokes full of color and life, to the painful end, where his paintings become dense and jagged, yet always with the ray of hope somewhere. I paid extra for an audio guide that helped fill out the story the masterpieces were telling. At one time I felt Vincent’s spirit come visit me, a fellow artist. I believe in such occurrences so said hello and made a bow and prayer.

For some reason I was having to use the toilet frequently. After a few visits I was annoyed and thought, what is this, a joke?

After the exhibit I went out in the cold and drizzle and walked around Vicenza, taking pictures. Arriving back at the station, I checked the departure board and saw that a train was scheduled to leave for Venice in about fifteen minutes. I noted the track and on the way there, checked again to be sure.
On the train I passed my time reviewing my photos and lounging. Mid-way I had a strange feeling about my locale but tossed it off.  I was having to use the toilet and thought, but I am not drinking water! Where is it coming from? The train stopped a few times, as it had on the way. I sat in my seat looking up causes for frequent urination. One was anxiety. Yes, the weather was shifting, Cristiana had a weird occurrence, VanGogh visited me after he cut off his ear and committed suicide, I am a bit lost in a foreign land, and in flux without a ticket home . . .  so? About this time, the train stopped. Everybody got off and I looked out the window to see that we were in Verona. Wait, Verona? My phone showed Verona to be in the opposite direction from Venice. Maintenance people starting coming through, cleaning up. I asked one if we were going to Venice. “Si, Venezia.” 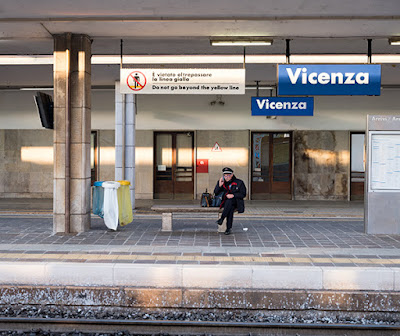 After a long stop in Verona, the train headed back to Vicenza, an hour away. I felt trapped in my body on the phantom train ride. The thought came that I could not get out of the scene I was in. Then I thought of my dear Naomi, who was thrown into a much more morbid drama as she had to live with cancer. I remembered her struggle fighting a sadistic monster and how she managed to stay in the light and win the battle though lose her life. In the end, some of her last words were, "I love my body, it has been so good to me!"

OK, the train would take me four hours instead of one to arrive in Venice. Along the way a conductor asked to see my ticket, which never happens. I was standing near the doors, outside the toilet when he came up. He spoke in Italian and said I had to pay a fine. I tried to explain I had not left the train and had a ticket to Venice. No matter, I did not pay from Verona. He took my money and put it in his wallet.

THE DREAM is comical too.

At last we came to Venice. I felt as though I was in a fantastic Van Gogh painting.