Kindness Towards The Outside World

Have you ever heard of the phrase, random act of kindness? According to Wikipedia, the free online dictionary, it describes "a non-premeditated, inconsistent action designed to offer kindness towards the outside world."

Almost exactly eleven years ago, I was on the receiving end of such kindness and it is as fresh today as it was when it occurred. That is the nature of such deeds; to remain always young, vibrant, and with everlasting fragrance.

I was visiting a friend in Rutigliano, a village in the Puglia region of southern Italy. I wrote about the episode, and here it is again: 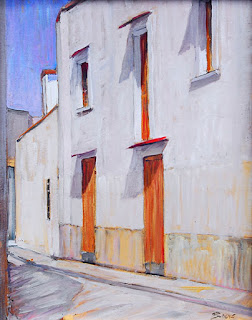 Sometimes while I am outdoors painting, my activity arouses people’s curiosity. In the old quarter of Rutigliano, in a neighborhood of stone streets so small cars cannot enter, I set up my easel and painted. A dozen or so curious people at various times arrived at my side to look. Youngsters especially were unafraid to approach. An old, slow moving, toothless fellow came along and took a pleasurable interest. He spoke but I could not understand, so I said in Italian, “I am an American artist, and can speak a little Italian, but not very well.” Turning to go, he halted and speaking in Italian, asked if I wanted a cigarette. After he was gone, I returned to my painting, and a few moments later he re-appeared and asked if I would like it if he brought some coffee. I said, “yes,” then he disappeared around the corner and five minutes later brought me espresso. For his random act of kindness, I thanked him profusely. He vanished again and I painted in earnest because the sun was moving across the afternoon sky causing the light and shadows to rapidly change so that my subject looked different with each passing moment. Twenty minutes later the fellow came again and strolled up, holding a plastic bag in his wrinkled hand. He opened and held it out, and I saw a pair of used, but nice, Italian leather shoes. Momentarily confused, I wondered what he was doing. The shoes looked about my size, and he pointed to my feet and then put the bag in my hand. Looking up into my face with a smile, he said something. I leaned over and kissed his whiskered cheek, then he shuffled away.