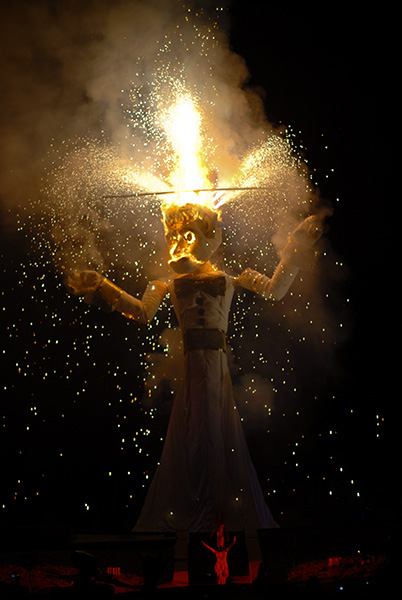 It's that time of year when the people of Santa Fe celebrate with an annual fiesta. A spectacular occurrence sets off the festivities with a bang: the burning of Old Man Gloom—otherwise known as Zozobra. "Zozobra is a hideous but harmless fifty-foot bogeyman marionette. He is a toothless, empty-headed facade. He has no guts and doesn't have a leg to stand on. He is full of sound and fury, signifying nothing. He never wins. He moans and groans, rolls his eyes and twists his head. His mouth gapes and chomps. His arms flail about in frustration. Every year we do him in. We string him up and burn him down in ablaze of fireworks. At last, he is gone, taking with him all our troubles for another whole year. Santa Fe celebrates another victory. Viva la Fiesta!" - A.W. Denninger


My partner, Amy Córdova had two of her artworks selected for posters of the event, which draws tens of thousands of people. The local Kiwanis Club is the sponsor and proceeds go to the Boys and Girls Clubs of Santa Fe. The theme for this year was the era of the sixties. So Amy made a take-off of the Beatles Abbey Road Cover and also Zozobra wearing bell-bottoms and John Lennon glasses.

Amy was given four VIP passes to the burning, so we will be close up. Next week I will post a story with photos of the burning of “Old Man Gloom.”