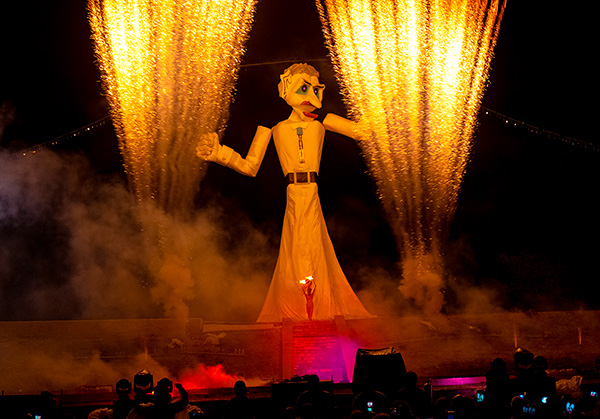 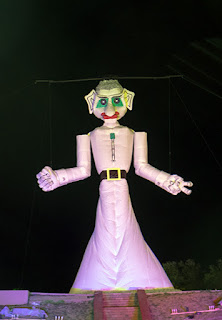 He burns every year to great fanfare. Zozobra is called “Old Man Gloom”, and is constructed each year then burned at a stake in front of a large crowd. He has grown from his original height of about nine feet into the largest marionette in the world—50’ (15.21 m) tall. The event is the cause of great jubilation and people come from far and wide to witness it. The spectacle is the official start to Santa Fe’s Fiesta.

My partner Amy Córdova won the contest to have her artwork depicted on the Zozobra poster and was given special tickets. The theme was the sixties so she incorporated symbols from that era.  I haven’t been in years, and had issues with the burning of an effigy. Amy doesn’t like being in big crowds and was tempted to not go. But she is one of the stars of the show this year and I insisted we attend. 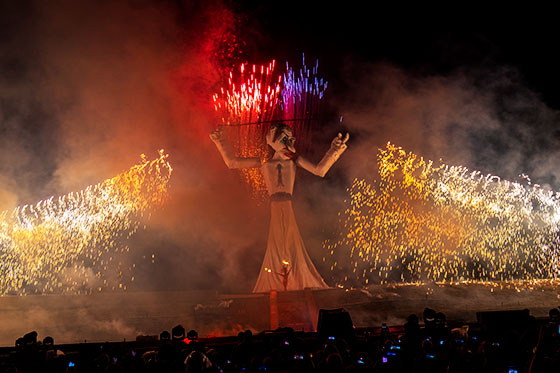 It is always a crazy event and people get bloodthirsty and overly excited. There is never enough parking and the field where he is burned is packed with all types of folks. I have a van so we put bicycles in it and drove as close as we could, then rode.

The air felt cool, with dramatic dark clouds becoming darker by the moment as the sun began setting. A steady stream of people walked on closed streets guarded by police at checkpoints. Near the park, Christian protestors proclaimed against the event, holding signs and entreating for Jesus. We found a fence, and locked our bikes to it. Our bags were checked and to my surprise we had to empty a thermos with coconut water in it. Only water from inside the park allowed. Our picnic food was okay. 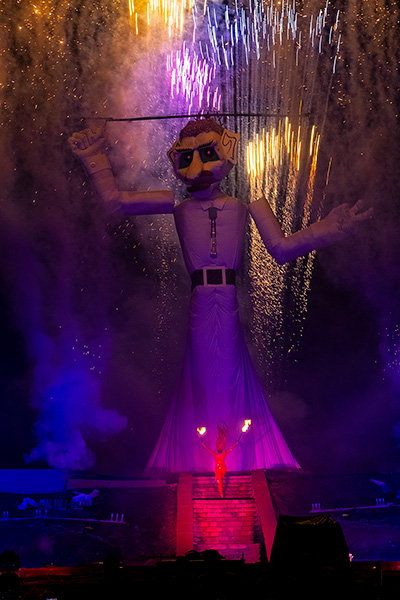 I held Amy’s hand and pulled her forward through the crowd. People were everywhere, some already arrived and others streaming in. “I haven’t seen a crowd like this since carnival in Rio de Janeiro!” I said. We stopped at a concession stand to see Amy’s posters on sale then continued weaving into the mass of people standing or seated on blankets. I felt determined to arrive at the best vantage point available to us and we reached a spot directly in front of Zozobra and claimed a tiny patch of lawn. Now we had to wait an hour and half.

A bandstand nearby was the venue for live music that blared through loudspeakers. Anticipation was in the air as lightning flashed in the sky and thunder clapped. Zozobra stood at the top of a row of steps gazing imperturbably down at us. He looked clean and white against the dark blue expanse of sky. Around his neck hung a bolo tie.


“I felt a raindrop!” Amy exclaimed. Yep, soon it was raining steadily. Most people had brought ponchos or an umbrella. How could we have not bothered? Oh well, the music continued, lightning flashed behind Zozobra and thunder rolled. 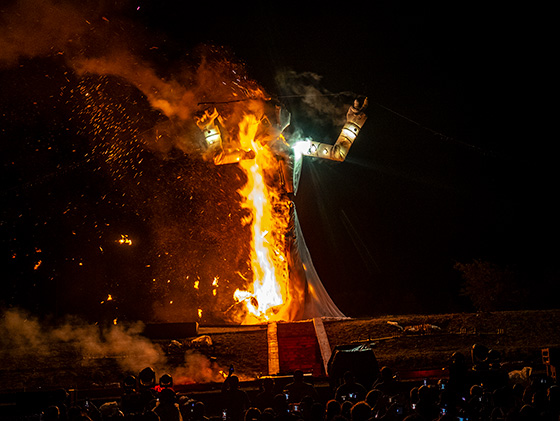 At nine o:clock the mayor came out and shouted “Viva fiesta!” A proclamation reciting all the sins of Zozobra was read. The crowd chanted the verdict, “Burn him”.  Ghouls swarmed down the stairs, people with fiery torches pranced, and a beautiful woman fire dancer dressed in red leapt about with flaming torches at Zozobra’s feet. He began to move and moan. A string of firecrackers flashed from both sides of his head. His eyes came aglow. HIs head turned from side to side. Zozobra awoke and seemed to sense his fate. Then a little flame started him afire. All the crowd stood—some screaming burn him! I found myself shouting with the rest. It felt good. He seemed to catch fire from the inside. Light came from his mouth and he groaned loudly. Fireworks began shooting up behind his back as colored lights bathed him aglow. He became illuminated in fire and flickering brilliance. Everyone felt ecstatic, and some maybe a little sad. This year, I didn’t feel sad for him . . . he was built to burn; fulfilling his purpose. Anyway, he will be back again next year. 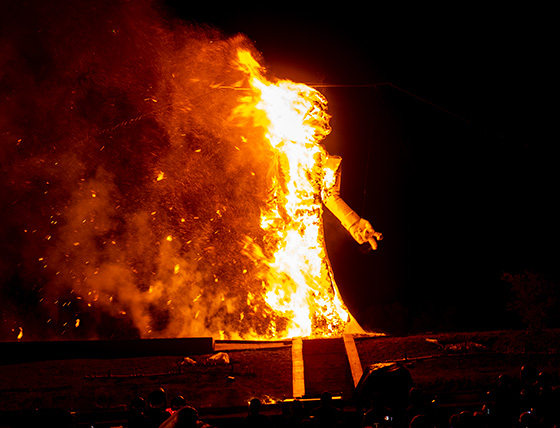 For more about Zozobra: