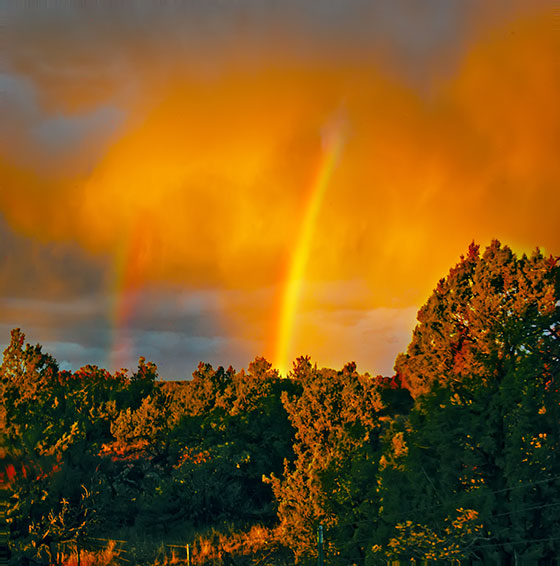 We all knew it was a message of love coming from heaven above. A once in a lifetime display never to be seen again. It’s been nineteen years since it happened but is still mentioned and makes me think how SPIRIT can use all creation to communicate to humans. Moreover, beings in the next world can give us physical signs that write indelible language upon our souls.

Someone recently read my memoir of my daughter Naomi called, A Heart Traced In Sand, Reflections On A Daughter’s Struggle For Life, and he mentioned the event. The story concludes the book. It demonstrates how life is interwoven through many realms; visible and invisible.

Naomi died of cancer in 1999 at age nineteen after a heroic battle to stay in the world she loved. One year later a group of devoted friends gathered at our home to remember her life. A woman who had been Naomi’s teacher brought materials to make a cord that we all could hold. Small pouches holding sacred objects like rose petals and each person’s note to Naomi were tied to the cord. We all went outside to a lawn and garden then stood together in a circle holding the cord and our prayer bags. One by one we read our remembrance and prayer. The sky had been cloudy and now it rained lightly in a mist. This was unusual because we had been in a drought. A dazzling rainbow appeared beside us. When the last person had read, we all stood together in unity. Suddenly two doves appeared directly above our circle, hovered for a second then dove spiraling downward so closely that their wings almost touched. Down they flew with rapidly beating wings and in perfect precision flew upward again, only to spiral down in place and rise again. The beating wings and precision of their spirals was joyous. It was apparent they came to bring a message of love to us. Then they flew away. One young person burst out, exclaiming, “I hope she keeps sending us messages like that, letting us know everything is okay!”