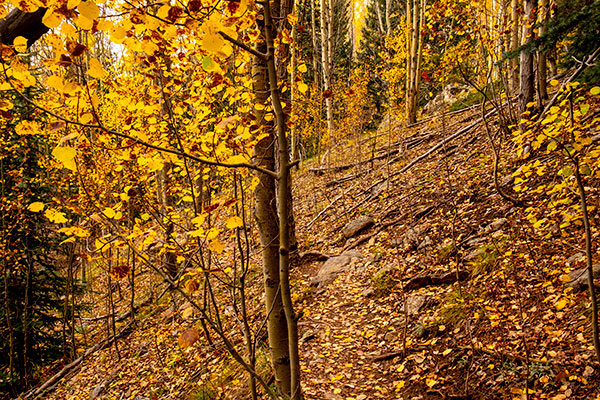 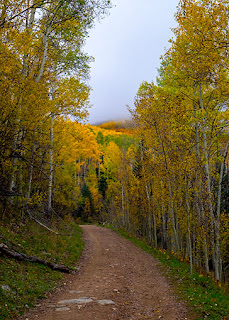 I stumbled upon a shrine someone made and hid in the woods. Intoxicated with mountain fever and wandering off a trail at upper elevations, beauty had made me drunk. It is in moments like these that surprise comes.

Shimmering gold against a blue sky makes for a sublime dance in the mountains. For a brief span of about two weeks at the beginning of October it’s entrancing to go hiking in the woods high above the city. As seasons shift and autumn arrives, aspen trees heart-shaped leaves quake and gleam golden at the slightest breeze. Each white bark tree is rooted with another close by so that together, they make for some of the largest living organisms on earth and blanket mountainsides.

Amy and I began early—At 7, beginning with a stop for fresh coffee at a local cafe and then up along the winding road to Santa Fe Ski Area. Near the top is a favorite trail called Aspen Vista. We stopped there and to our surprise, although it was not yet 8:00, many cars were parked at the trailhead. It had rained recently so the ground was soft. A mist shrouded the upper mountain. We hiked on the broad path, reveling in the color of the aspens with accents of deep green from fir and spruce trees. 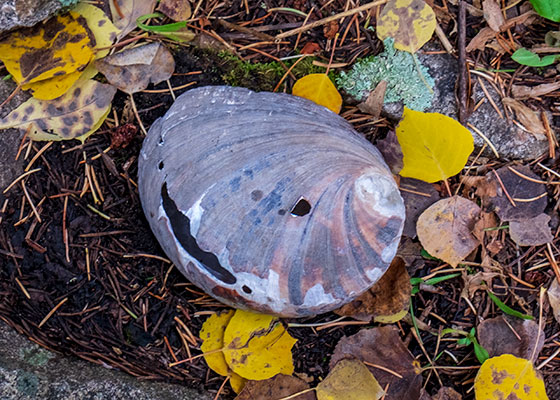 Near a small stream, we left the main trail to follow the water upward. Amy felt dizzy from high altitude so we found a place along the stream for her to sit. “I am going to explore the woods but won’t go far” I said, and left for a short sojourn into the primitive terrain, looking for the next photograph. Soon I was climbing over fallen tree trunks on the densely forested mountainside. The aspen stood side by side and shot up hundreds of feet toward the heavens. Often they are bare until near the top where foliage grows and receives sunlight. Dotted amidst the aspen are the deep green, sturdy fir trees with their skirts spread. I clambered over fallen trees and took photos, but thought of Amy and turned back after ten minutes. As I neared the stream, something caught my eye. A large shell gleamed underfoot. I had seen mollusk shells before in the southwest, even in desert regions where millennia before oceans covered the land. But this one was iridescent abalone and therefore struck me as unusual. Reaching down, I turned it over and saw that someone had put small symbolic objects underneath the protective cover. “Amy! Where are you?” I shouted. “Here” she replied and I saw her move just fifty feet away. She came and we both studied the tiny shrine. Amy is more familiar with native symbols and began telling the importance: Abalone shell used in sacred ceremonies for burning sage, obsidian stone, also called dragon stone, is volcanic glass and used in making arrow heads and also clearing blockages, white quartz for healing and purification, Native American pottery shard representing first people, and a metal bookmark with shell emblem—perhaps representing wisdom. 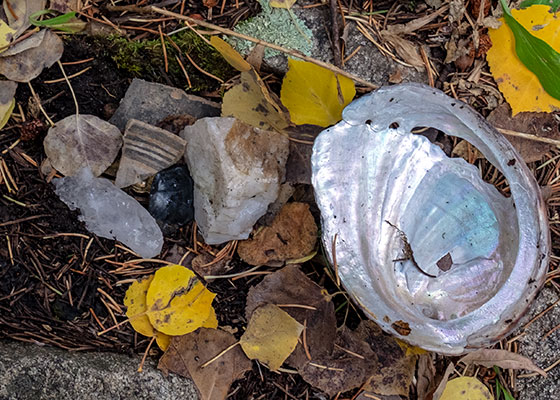 Someone had deep communication in the woods and felt thankful enough to make a sacred offering in a private ceremony which for some reason I was meant to discover.

The abalone is back in its place in the ocean of trees.