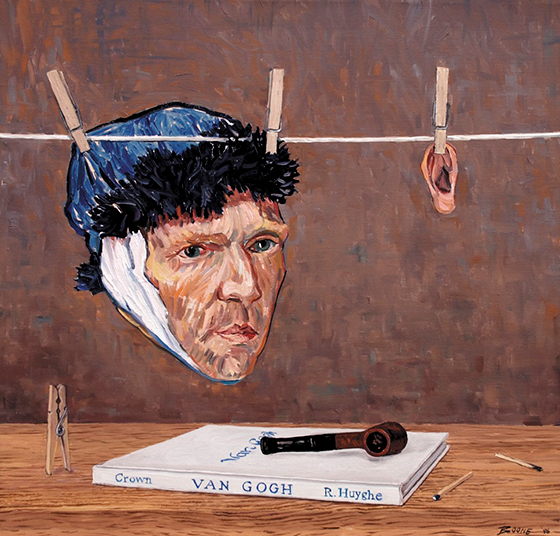 The picture of the bandaged head hanging from a clothesline with an ear pinned next to it took her by surprise. The young woman had been happily thumbing through my print drawer full of colorful landscape images. She spotted something different and could not take her eyes off it. I explained, "This is Vincent Van Gogh after he cut off his ear."
"Wow," she said, "I have to go get my boyfriend and bring him to look at this. He is across the hall at the jewelry shop buying a bolo tie."

A few minutes later the couple came in and I explained that the painting is part of my series called Hangups—images of faces hanging from clothespins. I showed them my book and pointed out Van Gogh, All Hung Up. "This one is in a museum in Arles, France, where Van Gogh lived." I said.
They bought the print: signed, numbered, and made with archival ink on 100% cotton rag paper. To go along with it I included a book.

Yes, Van Gogh did it. It was the night before Christmas Eve in 1888 -- a cold Sunday evening in the French city of Arles -- when Vincent Van Gogh took the razor he kept on his small dressing table and slashed off his left earlobe. After he was bandaged, he made a self-portrait that I used in my painting—exactly as he painted it. And I put his ear next to him.

The Hangups are my most unique series of art. I made the first on a whim in 1993 and more soon followed. My most prolific year was 1996 but I had to stop because they are unsettling. The last one I made was Hillary Clinton and Donald Trump when they were candidates for president in 2016. 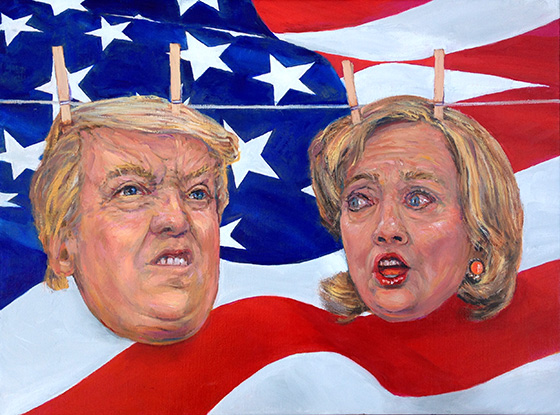