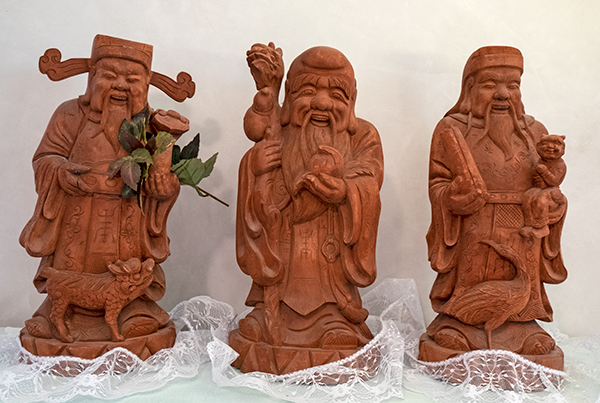 We first met in a little art gallery in Hoi An, Vietnam. The front door on the cobbled street was wide open and I walked in, curious about the shelves and walls covered with magical wood carvings. After a brief greeting with the young sales woman, I became entranced by three carved figures, standing together on a shelf. They are meant to stay together and I bought all three, along with a teak wood Buddha and a few other carved objects.

The three have been with me for years now. I forgot what each man represents and sent photos to a friend in Vietnam who sent me the info. Over time I lost track again.

They stand on a bookcase and offer silent blessings each day. I could not tell Amy what they personify and had to work hard to come up with three phrases; happiness, longevity and prosperity . . . but could not identify which is which.

A search on the internet came up with answers. They are “Sanxing” the 3 Star Gods. In my picture above, the first figure, from the left is Lu Sing, who wears the ornate head dress. He is the deity of prosperity and gives guidance in matters of career, social status and fortune. The next figure, with bulbous forehead and holding a peach in one hand is Shou Xing. The peach represents immortality. He knows how long every human being will live. He carries a gourd, attached to a dragonhead staff, that holds the elixir of life. The last figure is Fu Xing, auspiciously associated with the planet Jupiter and considered the personification of good fortune. He is generally depicted in scholar's dress, holding a scroll, on which is sometimes written the character "Fu". He may also be seen holding a child, or surrounded by children. Mine also has a crane at his feet.

Knowing the meaning behind the sculptures deepens their effect. May they always stand together for the highest good.
Posted by Steve at Sunday, August 12, 2018
Email ThisBlogThis!Share to TwitterShare to FacebookShare to Pinterest
Labels: blessing, happiness, Hoi An, Longevity, Prosperity, sculpture, Taoism, Vietnam