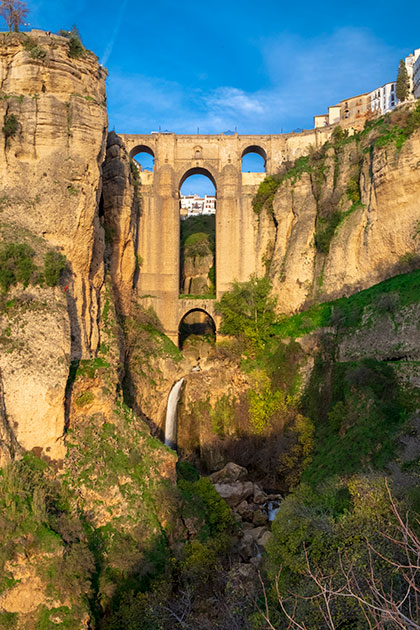 The little cobbled streets bend and turn in every direction. An average sized American car would be useless. Amy and I have arrived in Ronda, Spain driving a rented Peugeot that is small enough to get through narrow streets, but at times I get frustrated how close I am to other cars, curbs or walls. Looking around I am amazed that I do not see vehicles with dents and scrapes. Getting to our apartment using Google Maps proved almost impossible. We stopped from frustration and walked, knowing we were close to where we wanted to be. It was then that we we felt enchantment for we were in a very old part of the city, with winding cobbled paths, a bridge built by Romans over deep gorges with a spry river running underneath, and little plazas with statues. Eventually our proprietor met us at a plaza and guided us to our flat.

We have learned that Ronda has enchanted and invigorated some very famous artists including the German poet Marie Ranier Rilke, American writers James Joyce and Ernest Hemingway, and actor Orson Welles—who chose to have his ashes scattered over the earth here. He loved Ronda and said, “A man does not belong to the place where he was born, but where he chooses to die.”

Hemingway came for the bull fights. Ronda’s spectacular bullring is the oldest in Spain, built in 1785.
Rainer Maria Rilke (1875-1926) was suffering terrible writer’s block and overcame it after leaving Paris and sojourning in Ronda. He said, “The spectacle of this city, sitting on the bulk of two rocks rent asunder by a pickaxe and separated by the narrow, deep gorge of the river, corresponds very well to the image of that city revealed in dreams. The spectacle of this city is indescribable and around it lies a spacious valley with cultivated plots of land, holly and olive groves. And there in the distance, as if it had recovered all its strength, the pure mountains rise, range after range, forming the most splendid background.” 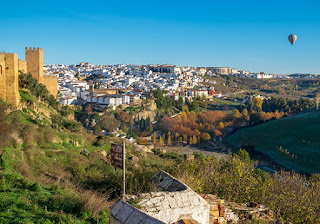 We knew nothing of famous people, bullfights, or legends when we arrived. It is on our way to Algeceris, Spain near Gibraltar where we will be in a few days to hand over our rental car and take a boat to Morocco. On the map it looked like an attractive stop on route. Today, Amy said, “I like Ronda better than Granada or Cordoba . . . it is my favorite place so far.” We extended our stay.
I have to agree because the setting is wonderful, it has a historic yet urban demeanor, is lively, but respectful and in short, a great place to be creative. 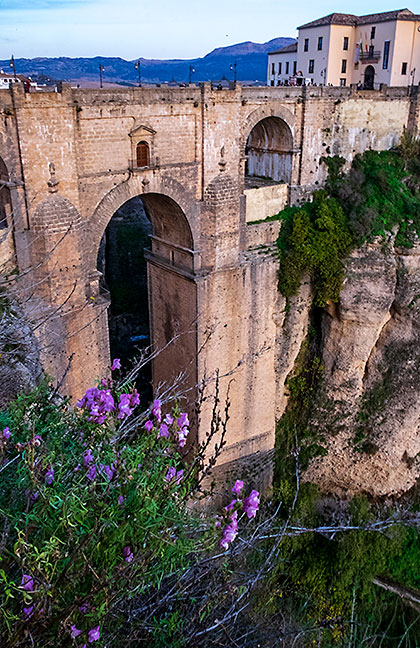