After leaving cosmopolitan Granada, Spain, Amy and I have gone north. Every night in bed we read from Don Quixote, written by Miguel de Cervantes in 1605 - 1615. “The story follows the adventures of a noble (hidalgo) named Alonso Quixano who reads so many chivalric romances that he loses his sanity and decides to become a knight-errant(caballero andante), reviving chivalry and serving his country, under the name Don Quixote de la Mancha. He recruits a simple farmer, Sancho Panza, as his squire, who often employs a unique, earthy wit in dealing with Don Quixote's rhetorical orations on antiquated knighthood. Don Quixote, in the first part of the book, does not see the world for what it is and prefers to imagine that he is living out a knightly story.” (Wikipedia). How appropriate that I have also followed in his footsteps—referring to my life as THE DREAM. Amy is totally with me, so we have gone searching for windmills to vanquish, and found them. 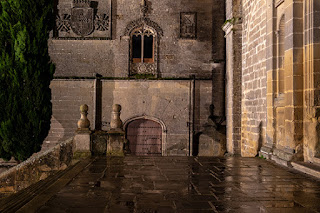 Our first stop was Baeza. In the two days we stayed there we saw hardly a soul. Some if its streets are a thousand years old and the town is so preserved with antiquity that in 2003 it was added to UNESCO's list of World Heritage Sites.It seemed we were in a movie, with a stage set in the renaissance and all the actors were gone.

Heading north again, following road instructions on Google Maps, we immediately found ourselves amidst immense tracts of olive orchards. Both of us were amazed at countless olive trees in neat rows as far as we could see. They sometimes overtook entire mountains; marching up one side and down the other. At one point, a gleaming golden wall caught my eye in passing. It was shrouded on a hillside not far off, amidst trees. I knew from my previous trips to Andalusia that there are many deserted estates. “Oh, I want to explore!” I said. Amy replied, “Well stop and turn around.” We found a little road and it was slick with mud in places. Adventure called and I managed to get to a dry place and stop, almost entirely confidant I could get us out again. We walked in wet grass and slippery clay to get to the place. 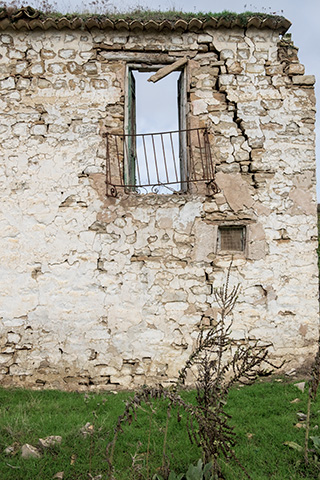 I felt such excitement and nostalgia too. The walls were holding up but the roofs were caved in and gone. Rubble filled the inside but I found a way in. Just then the sun came out from behind clouds and I felt the grand nature of the place as it once was. I took pictures as Amy sat  pondering by an old well. When we reached our car we were both covered in clumps and splatters of white clay. “Oh well, “ I said as we drove out, “it was worth it.” 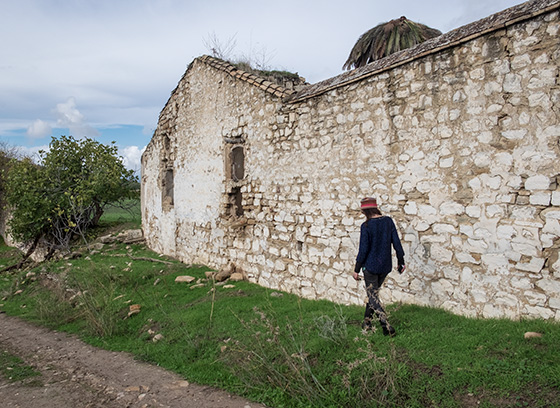 Now we are in Consuegra, Spain. Our flat is spacious but does not seem to get warm enough. Our first excitement was to find the windmills that stand on a hilltop next to a castle built circa 1183 overlooking the town. Amy and I imagine these are the mills that Don Quixote took to be giants and charged at on horse with his lance intent on doing battle—heedless of the entreaties of his squire Sancho Panza that he was only fighting windmills. 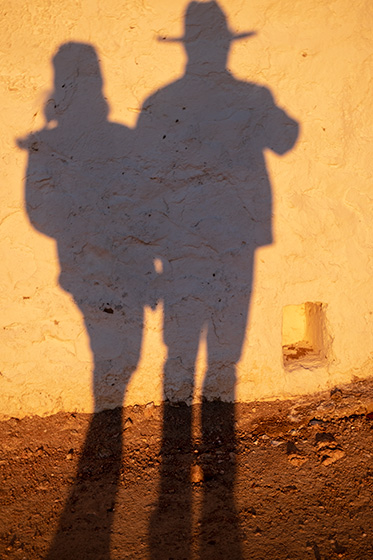