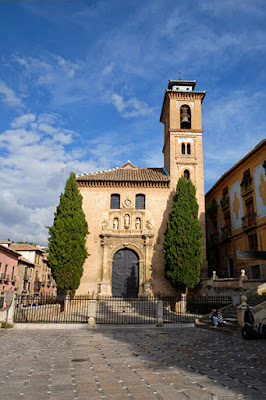 Until death it is all life”
― Miguel de Cervantes Saavedra, Don Quixote

Now that we are in Spain, a curious ritual has arrived unexpectedly. In bed at night in our quaint apartment tucked on a hillside along a stream we read to each other Don Quixote of La Mancha, by Miguel Cervantes, (Spanish, 29 September 1547 (assumed) – 22 April 1616). At separate times in our youth both of us attempted reading the famous work from the Spanish Golden Age of literature but were daunted by its idiosyncrasies. Now in the land of its birth and on our own Quixotic journey of sorts, chasing windmills of our imaginations, we feel the pathos and understand the humor—exclaiming out loud and laughing with one another. When lights go out we continue to adventure side by side in dreamland.


Our first sojourn as a couple in the Old World begins in Granada. Years ago I lived here briefly and liked the part of the city called Sacromonte. It is best known for the flamenco venues. Caves in the mountainside are home to troupes of dancers and musicians. We will go tomorrow night and be in the thick of tradition. I am taking Amy to the same cave I experienced earlier. It is a narrow room with whitewashed earth walls and wood plank runway down the middle. The audience sit on either side within touching distance of the flamenco dancers as they strut and twirl to the strident notes of the musicians just behind them. 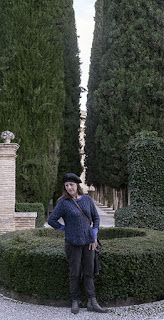 My fair lady Amalia de Córdova of Santa Fe, Nuevo Mexico USA is wounded but carrying on gallantly as a woman of high lineage does. Before we left Mexico City less than a week ago, she was bitten by bed bugs. Maybe I was bitten too, but it had no effect. Our hotel was highly rated and we were pleased, yet I saw a bug on the bed our last morning and killed it, thinking nothing much about it. When we arrived to Europe after a long trip, Amy had inflamed bites on her chest, back and neck. It got worse. The red circles around the bite centers expanded so much that a bright red welt became one mass the size of Texas on her torso. It has hurt terribly. So with some difficulty we ventured forth to Alhambra, the awesome palace overlooking the city—and just above our apartment. Amy has refused a doctor so I have been concocting home remedies to help. Thankfully, a paste of honey and turmeric applied over the welt is slowly helping. A spice shop just on the cobbled street out front along a little river has all the herbs we need.

Don Quixote and  Nasrid emir Mohammed ben Al-Ahmar of the Emirate of Granada would approve.
Amy has said she feels “at home” here although it is her first visit. Even more so than when she stayed in Córdoba, the town that is her namesake. 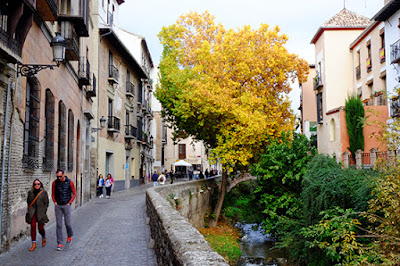 We will venture forth soon in quest of windmills that stand like giants and once battled Don Quixote at Consuegra, then on to Córdoba.

Take my advice and live for a long, long time. Because the maddest thing a man can do in this life is to let himself die.
― Miguel de Cervantes Saavedra, Don Quixote

(For more from my previous adventures here, type Granada in the search bar at the top right of this blog.)
Posted by Steve at Sunday, November 18, 2018
Email ThisBlogThis!Share to TwitterShare to FacebookShare to Pinterest
Labels: Alhambra, Caves, Don Quixote, flamenco, Granada, Nasrid emir Mohammed ben Al-Ahmar of the Emirate of Granada, Sacromonte, Spain