Oaxaca and Day of the Dead 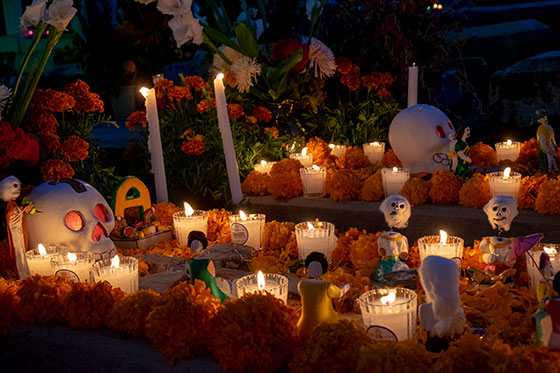 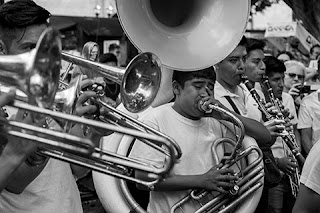 Now that Amy and I are in Mexico, we give ourselves to surprise and the unexpected. Being in Oaxaca during the celebration of Dia de Muertos, (Day of the Dead,) takes our experience to another level altogether.

We are situated in an apartment just two blocks from the town center. Our comfortable room is in a complex belonging to an elderly Mexican woman, Maria, who shares her extra space.  Amy is conversational in Spanish.

We have been in Oaxaca four days but it feels like we are living lifetimes. Mornings start out quiet and relaxed with barely traffic, then as the day progresses everything intensifies. By evening lines of cars move slowly on the avenues that are open and people flood streets in the center that are closed to traffic. Families are in costume and many people parade with painted faces. Clusters of musical groups abound, often accompanied by costumed dancers. I love the strong brass sections that always have tuba players that huff and puff along with the drummers belting out percussion.

The multi-day Dia de Muertos holiday focuses on gatherings of family and friends to pray for and remember those loved ones who have died, and help support their spiritual journey. It is common to see “ofrendas”, altars decorated with marigold flowers and items like food that are made as gifts to the deceased. Supposedly the dead can follow the pungent scent of the marigolds and arrive home. Copal incense is burned too. Maria set up an altar in her home and when she learned that Amy and I were going to make a little altar for Naomi, my daughter, she told us to include Naomi’s picture with those of her family.

The first night of the holiday, Amy and I hired a taxi and went to Xoxo (pronounced ho-ho) cemetery, an old, intimate resting place for the dead that is known by locals as the best place to have the real experience. We arrived at dusk and stayed until after nightfall. Families brought huge bundles of flowers and marched to the graves of their loved ones to place the blooms and light candles. We were careful at all times not to step on graves. We saw a big foreign man sitting on tombs while taking pictures and knew he did not know how to respect the place. I could hear Amy praying in Spanish as we went. I took photos of candles and tombs. Early in the evening we came upon a small group of locals sitting by the grave of a loved one. An old woman caught my eye and I asked to take her picture. She said something and nodded. Afterward Amy told me she had agreed and said, “Yes, because I will fly away very soon.” 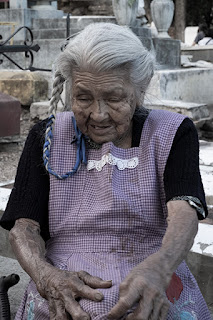 The next night we painted our faces in our room and found a cab to drive us to another cemetery, called Panteon Generale. It is bigger, but to our chagrin, after walking down a closed street with festive booths on each side we found the gates had closed at 6:30 PM. Oh well, that is how THE DREAM is sometimes. So we mingled with families having fun at a mini-carnival. At various times proud parents asked to photograph their children with us. 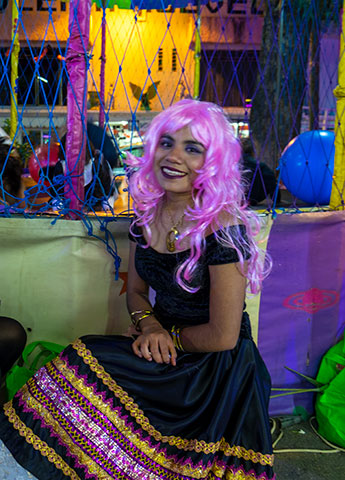 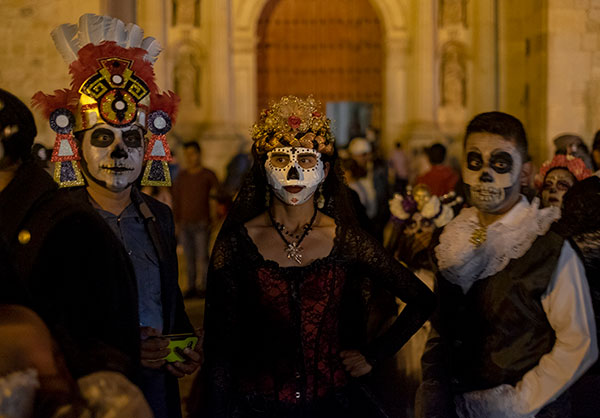 Events continue to unfold and yesterday a wonderful wood carver whose father is very famous drove with his wife from a nearby village to retrieve us and take us home. Isais is the son of artist Manuel Jimenez Ramirez (December 9, 1919 – March 4, 2005) who is a legend in southern Mexico. He and his family carry on the tradition begun by the father of painted wood carvings that are magical (alebrijes). Amy illustrated a book about Manuel, called Dream Carver. It is about a young boy who has visions to make wooden animals. He wants them wild and wonderful, different than the traditional carvings of his people. The animals he sees in his dreams are ones that he carves and decorates. The text is written by Amy’s friend, Diana Cohn.

To our surprise Isais has made a museum to his father and on the walls surrounding the museum are huge mural copies of Amy’s illustrations. We were treated very warmly and talked with Isais about how to revive the book, which is out of print. He said he is asked every day for copies. As our time with Isais concluded he took us into the showroom and with a wave told us to choose any painted wood carving we wanted. Amy and I both gasped because the artwork is very valuable—and masterpieces. Isais would not let us offer any money. We chose a sculpture and Isais had his son wrap it, then we got back in his Chevy Suburban and drove the forty five minutes back into town.

Before we left he said, “You are both part of our family now.”

Beautiful. The image of the woman in the cemetery is remarkable. Thank you for helping Amy be so happy. She deserves it.

The murals which grace the walls of the Jimenez-Ramirez Museum/ home were painted by local school children using the book cover and illustration as their guide.
Pure happiness !
Thanks to my husband, Steven Boone, the captures of the day were lovingly recorded in image and words.