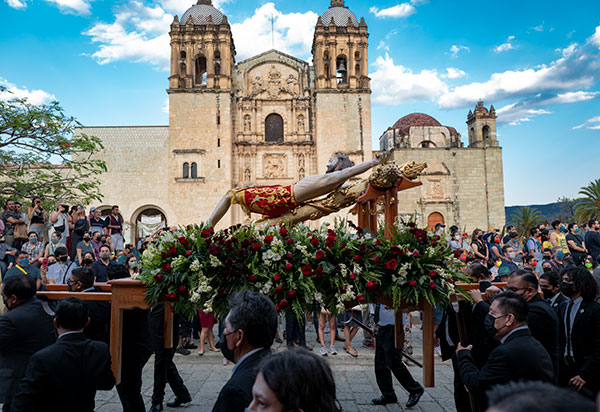 I knew I had to be on the street, up close at eye level for "La Procesión del Silencio", or the Procession of Silence. It is a yearly grand march winding through the center of Oaxaca. Various churches are represented with somber marchers and holy icons.
So I left Amy and our friends on the rooftop patio of the restaurant where we had a late lunch and walked a few blocks to the front of Temple Santo Domingo, in centro Oaxaca de Juarez, close to where the solemn parade was about to begin. Amy and the others stayed behind and waited for the marchers to wind their way in front of the restaurant, where they would have a bird´s eye view. 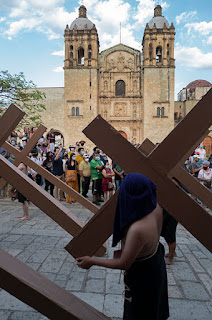 Streets were roped off. Onlookers, mostly locals of all ages with some tourists thrown in, lined each side. The parade began solemnly moving forward; every 100 feet stopping to pause. Facilitators were with each group of marchers, acting as guides. Press photographers were allowed in the street. The atmospheric reverence was more pronounced by pervasive silence in wrapt devotion. “The mystery is further heightened by the metered beat of a drummer, candlelight, shawl draped women, hooded men, the eerie sound of crosses dragging on the cobbled streets, and  illumination of a full moon.” ­Oaxacaculture.com
I had a good vantage point for taking pictures, and when the procession was near its end, I raced forward to the front, taking pictures again. By the time it reached the restaurant, I was up on the roof with Amy. 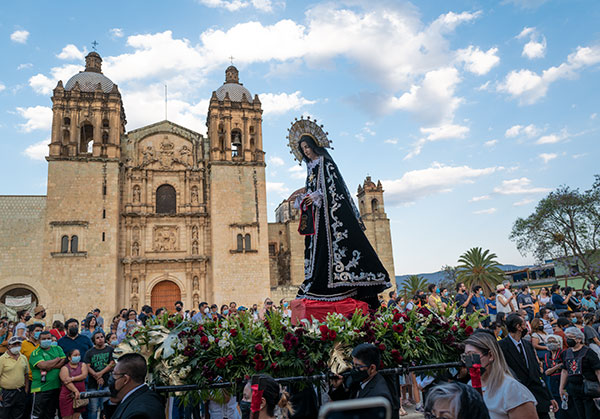 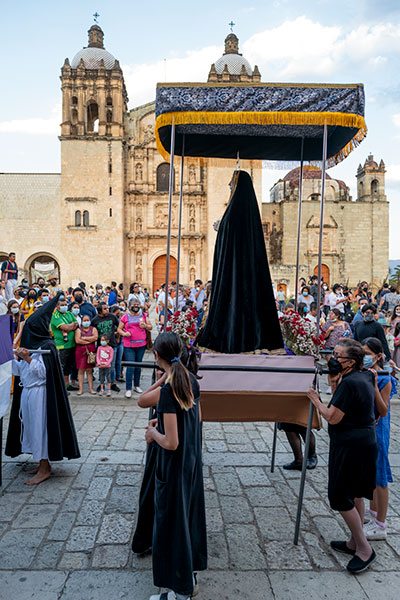 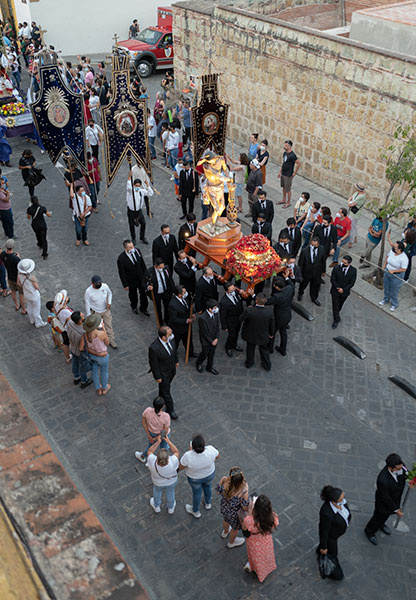 I did not grow up with religion, and only became “religious” by choice at the age of 19 when I joined the Bahaí Faith. Amy attended Catholic grade school, and can tell who is who when it comes to martyrs and saints in the Catholic faith.
"Bahá’u’lláh says that religion must be conducive to love and unity. If it proves to be the source of hatred and enmity, its absence is preferable; for the will and law of God is love, and love is the bond between human hearts. Religion is the light of the world. If it is made the cause of darkness through human misunderstanding and ignorance, it would be better to do without it."
‘Abdu’l-Bahá, The Promulgation of Universal Peace, p. 287
Posted by Steve at Sunday, April 17, 2022
Email ThisBlogThis!Share to TwitterShare to FacebookShare to Pinterest
Labels: Baha'i, Catholic, La Procesión del Silencio, mystery, Oaxaca de Juarez, procession, Procession of Silence, sacred